In this section, we’re going to look specifically at Software dependencies, although many of the concerns we’ll raise here apply equally to all the other types of dependency we outlined in Dependency Risk.

In the earlier section on Complexity Risk we tackled Kolmogorov Complexity, and the idea that your codebase had some kind of minimal level of complexity based on the output it was trying to create. This is a neat idea, but in a way, we cheated. Let’s look at how.

We were trying to figure out the shortest (Javascript) program to generate this output:

And we came up with this:

Which had 26 symbols in it.

Now, here’s the cheat: the repeat() function was built into Javascript in 2015 in ECMAScript 6.0. If we’d had to program it ourselves, we might have added this:

… which would be an extra 44 symbols (in total 70), and push us completely over the original string encoding of 53 symbols. So, encoding language is important.

Conversely, if ECMAScript 6.0 had introduced a function called abcdRepeater(n) we’d have been able to do this:

.. and re-encode to 14 symbols. Now, clearly there are some problems with all this:

Have a look at some physical tools, like a hammer, or spanner. To look at them, they are probably simple objects, obvious, strong and dependable. Their entire behaviour is encapsulated in their form. Now, if you have a drill or sander to hand, look at the design of this too. If it’s well-designed, then from the outside it is simple, perhaps with only one or two controls. Inside, it is complex and contains a motor, perhaps a transformer, and is maybe made of a hundred different components.

But outside, the form is simple, and designed for humans to use. This is ergonomics:

“Human factors and ergonomics (commonly referred to as Human Factors), is the application of psychological and physiological principles to the (engineering and) design of products, processes, and systems. The goal of human factors is to reduce human error, increase productivity, and enhance safety and comfort with a specific focus on the interaction between the human and the thing of interest.” - Human Factors and Ergonomics, Wikipedia 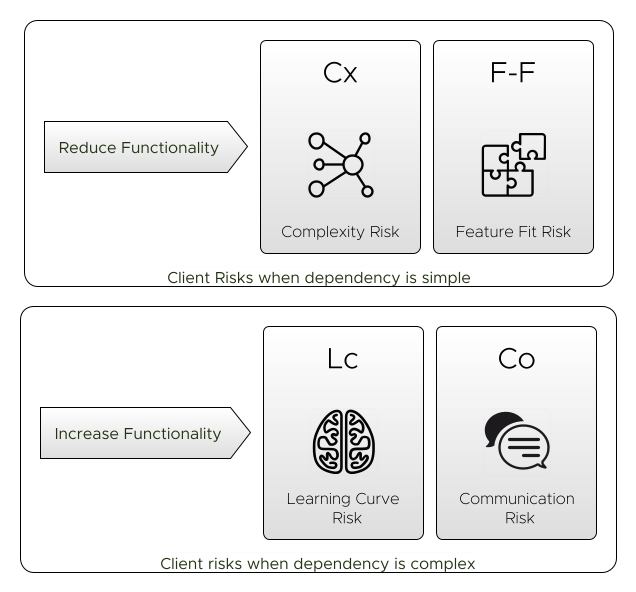 The interface of a tool is the part we touch and interact with, via its protocol. By striving for an ergonomic sweet spot, the protocol reduces Communication Risk. You can see this trade-off in the diagram above.

The interface of a system expands when you ask it to do a wide variety of things. An easy-to-use drill does one thing well: it turns drill-bits at useful levels of torque for drilling holes and sinking screws. But if you wanted it to also operate as a lathe, a sander or a strimmer (all basically mechanical things going round) you would have to sacrifice the conceptual integrity for a more complex protocol, probably including adapters, extensions, handles and so on.

So, we now have split complexity into two: 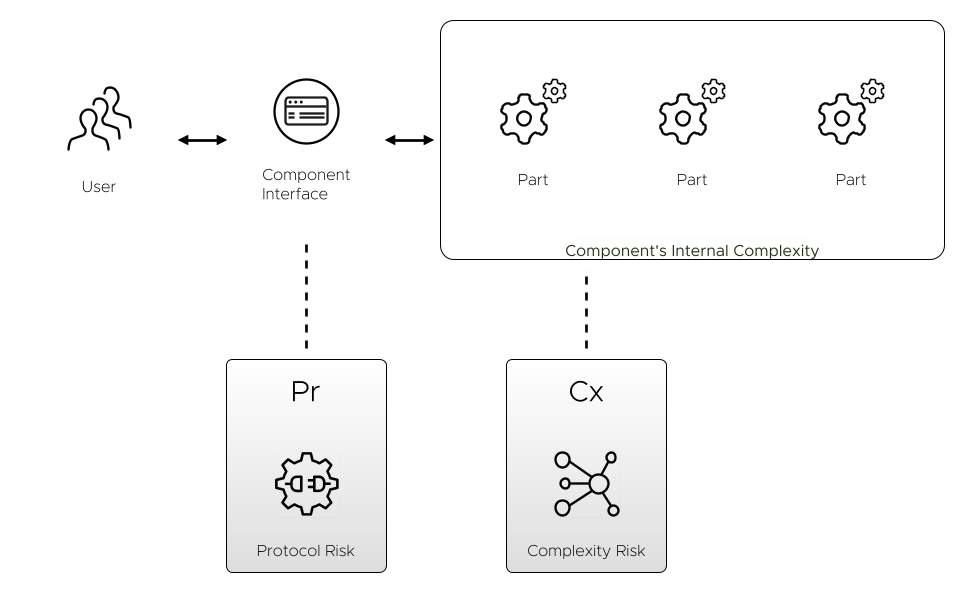 Software is not constrained by physical ergonomics in the same way as a tool is. But ideally, it should have conceptual ergonomics: complexity is hidden away from the user behind the User Interface. This is the familiar concept of Abstraction we’ve already looked at. As we saw in Communication Risk, when we use a new protocol, we face Learning Curve Risk. To minimise this, we should apply the Principal Of Least Astonishment when designing protocols:

There are lots of ways you can depend on software. Here though, we’re going to focus on just three main types:

All 3 approaches involve a different risk-profile. Let’s look at each in turn, from the perspective of which risks get mitigated, and which risks are exacerbated.

Way before the Internet, this was the only game in town. Tool support was very thin-on-the-ground. Algorithms could be distributed as code snippets in books and magazines which could be transcribed and run, and added to your program. This spirit lives on somewhat in StackOverflow and JSFiddle, where you are expected to “adopt” others’ code into your own project. Code-your-own is still the best option if you have highly bespoke requirements, or are dealing with unusual environmental contexts.

One of the hidden risks of embarking on a code-your-own approach is that the features you need are not apparent from the outset. What might appear to be a trivial implementation of some piece of functionality can often turn into its own industry as more and more hidden Feature Risk is uncovered. For example, as we discussed in our earlier treatment of Dead-End Risk, building log-in screens seemed like a good idea. However, this gets out-of-hand fast when you need:

Sometimes you will pick up Dependency Risk from unwritten software. This commonly happens when work is divided amongst team members, or teams.

If a component A of our project depends on B for some kind of processing, you might not be able to complete A before writing B. This makes scheduling the project harder, and if component A is a risky part of the project, then the chances are you’ll want to mitigate risk there first.

But it also hugely increases Communication Risk because now you’re being asked to communicate with a dependency that doesn’t really exist yet, let alone have any documentation.

There are a couple of ways of doing this:

Due to channel bandwidth limitations, if the dependency is being written by another person, another team or in another country, Communication Risk piles up. When this happens, you will want to minimise the interface complexity as much as possible, since the more complex the interface, the worse the Communication Risk will be. The tendency then is to make the interfaces between teams or people as simple as possible, modularising along these organisational boundaries.

In essence, this is Conway’s Law:

“organisations which design systems … are constrained to produce designs which are copies of the communication structures of these organisations.” - Melvin Conway, Conway’s Law

By choosing a particular software library, we are making a move on the Risk Landscape in the hope of moving to a place with more favourable risks. Typically, using library code offers a Schedule Risk and Complexity Risk Silver Bullet - a high-speed route over the risk landscape to somewhere nearer where we want to be. But, in return we expect to pick up:

But, it’s quite possible that we could wind up in a worse place than we started out, by using a library that’s out-of-date, riddled with bugs or badly supported. i.e. full of new, hidden Feature Risk.

It’s really easy to make bad decisions about which tools to use because the tools don’t (generally) advertise their deficiencies. After all, they don’t generally know how you will want to use them.

“Bounded rationality is the idea that when individuals make decisions, their rationality is limited by the tractability of the decision problem, the cognitive limitations of their minds, and the time available to make the decision. “ - Bounded Rationality, Wikipedia

Unfortunately, we know that most decisions don’t really get made this way. We have things like Confirmation Bias (looking for evidence to support a decision you’ve already made) and Cognitive Inertia (ignoring evidence that would require you to change your mind) to contend with.

But, leaving that aside, let’s try to build a model of what this decision making process should involve. Luckily, other authors have already considered the problem of choosing good software libraries, so let’s start there. 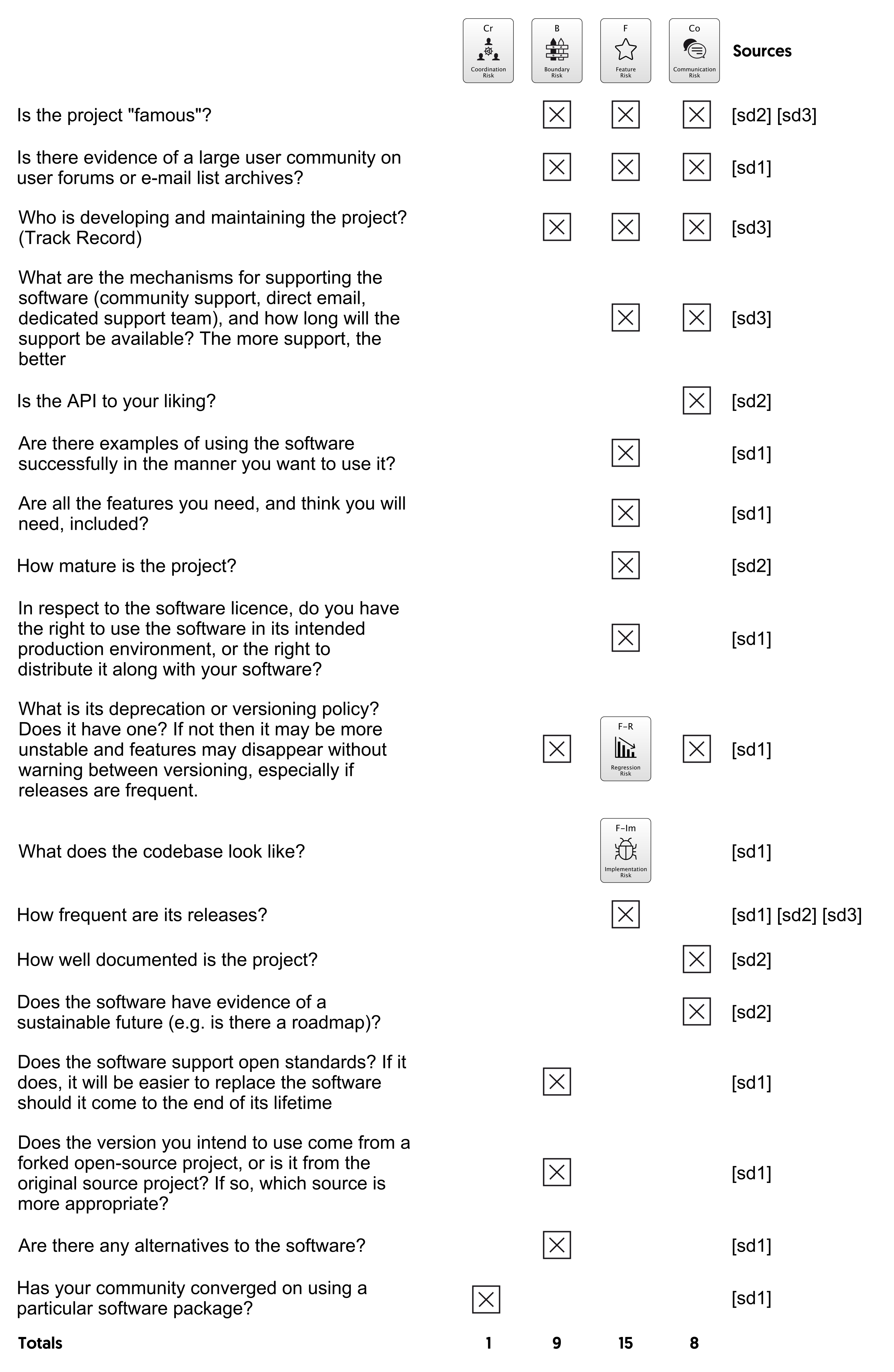 In the table above, I am summarising three different sources (linked at the end of the section), which give descriptions of which factors to look for when choosing open-source libraries. Here are some take-aways:

One thing that none of the sources in the table consider (at least from the outset) is the Complexity Risk of using a solution:

Sometimes, the amount of complexity goes up when you use a dependency for good reason. For example, in Java you can use Java Database Connectivity (JDBC) to interface with various types of database. Spring Framework (a popular Java library) provides a thing called a JDBCTemplate. This actually makes your code more complex, and can prove very difficult to debug. However, it prevents some security issues, handles resource disposal and makes database access more efficient. None of those are essential to interfacing with the database, but not having them is Operational Risk that can bite you later on.

Businesses opt for Software-as-a-Service (SaaS) because:

SaaS is now a very convenient way to provide commercial software. Popular examples of SaaS might be SalesForce, or GMail. Both of which follow the commonly-used Freemium model, where the basic service is provided free but upgrading to a paid account gives extra benefits. 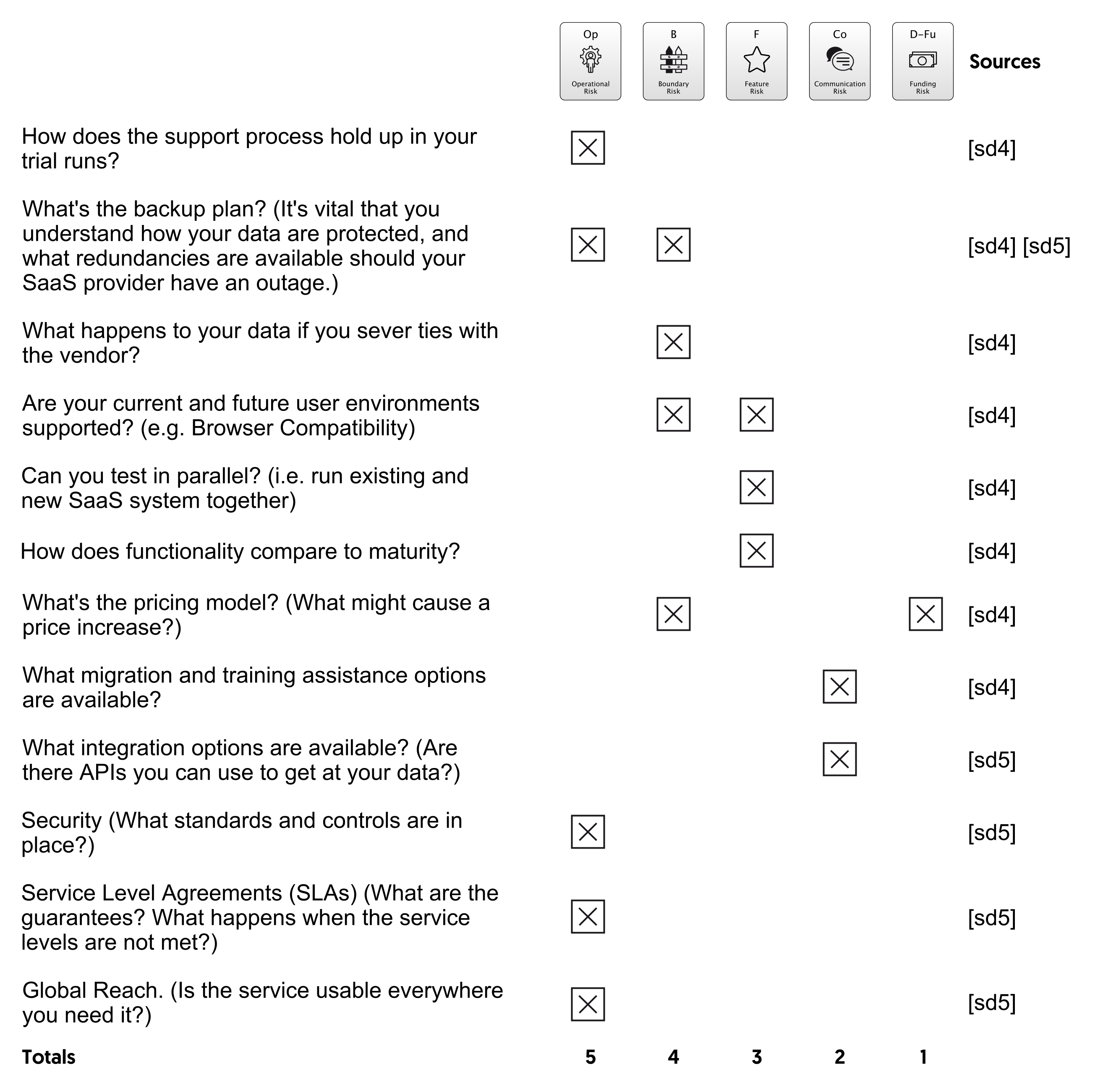 The diagram above summarises the risks raised in some of the available literature (sources below). Some take-aways: 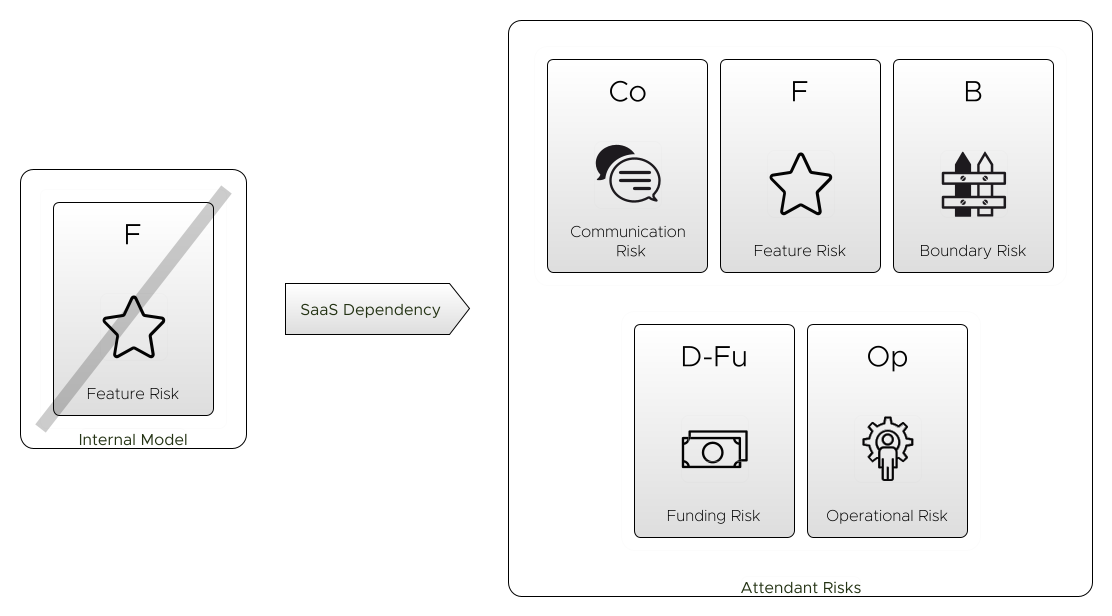 A Matrix of Options

But these are not the only ways to do it, and there’s clearly no one right way. Although here we have looked just at “Commercial SaaS” and “Free Open Source”, in reality, these are just points in a two-dimensional space involving Pricing and Hosting.

Let’s expand this view slightly and look at where different pieces of software sit on these axes:

So far we’ve looked at different approaches to software dependencies and the risk profiles they present. But the category is less important than the specifics: we are choosing specific tools for specific tasks. Software Dependencies allows us to construct dependency networks to give us all kinds of features and mitigate all kinds of risk. That is, the features we are looking for in a dependency are to mitigate some kind of risk.

For example, I might start using WhatsApp because I want to be able to send my friends photos and text messages. However, it’s likely that those same features allow us to mitigate Coordination Risk when we’re next trying to meet up.

Let’s look at some more examples:

Choosing dependencies can be extremely difficult. As we discussed above, the usefulness of any tool depends on its fit for purpose, its ergonomics within a given context. It’s all too easy to pick a good tool for the wrong job:

“I suppose it is tempting, if the only tool you have is a hammer, to treat everything as if it were a nail.” - Abraham Maslow, Toward a Psychology of Being

Having chosen a dependency, whether or not you end up in a more favourable position risk-wise is going to depend heavily on the quality of the execution and the skill of the implementor. With software dependencies we often have to live with the decisions we make for a long time: choosing the software dependency is far easier than changing it later.

Let’s take a closer look at this problem in the section on Boundary Risk. But first, lets looks at processes.