As we discussed in the Communication Risk section, our understanding of the world is informed by abstractions we create and the names we give them.

For example, Risk-First is about naming risks within software development, so we can discuss and understand them better.

Our Internal Models of the world are constructed from these abstractions and their relationships.

As the diagram above shows, there is a translation going on here: observations about the arrangement of atoms in the world are communicated to our Internal Models and stored as patterns of information (measured in bits and bytes).

We face Map And Territory Risk because we base our behaviour on our Internal Models rather than reality itself. It comes from the expression “Confusing the Map for the Territory”, attributed to Alfred Korzybski:

“Polish-American scientist and philosopher Alfred Korzybski remarked that “the map is not the territory” and that “the word is not the thing”, encapsulating his view that an abstraction derived from something, or a reaction to it, is not the thing itself. Korzybski held that many people do confuse maps with territories, that is, confuse models of reality with reality itself.” - Map-Territory Relation, Wikipedia

As the above diagram shows, there are two parts to this risk, which we are going to examine in this section:

In the Feature Risk section we looked at ways in which our software project might have risks due to having inappropriate features (Feature Fit Risk), broken features (Feature Implementation Risk) or too many of the wrong features (Conceptual Integrity Risk). Let’s see how these same categories also apply to Internal Models. 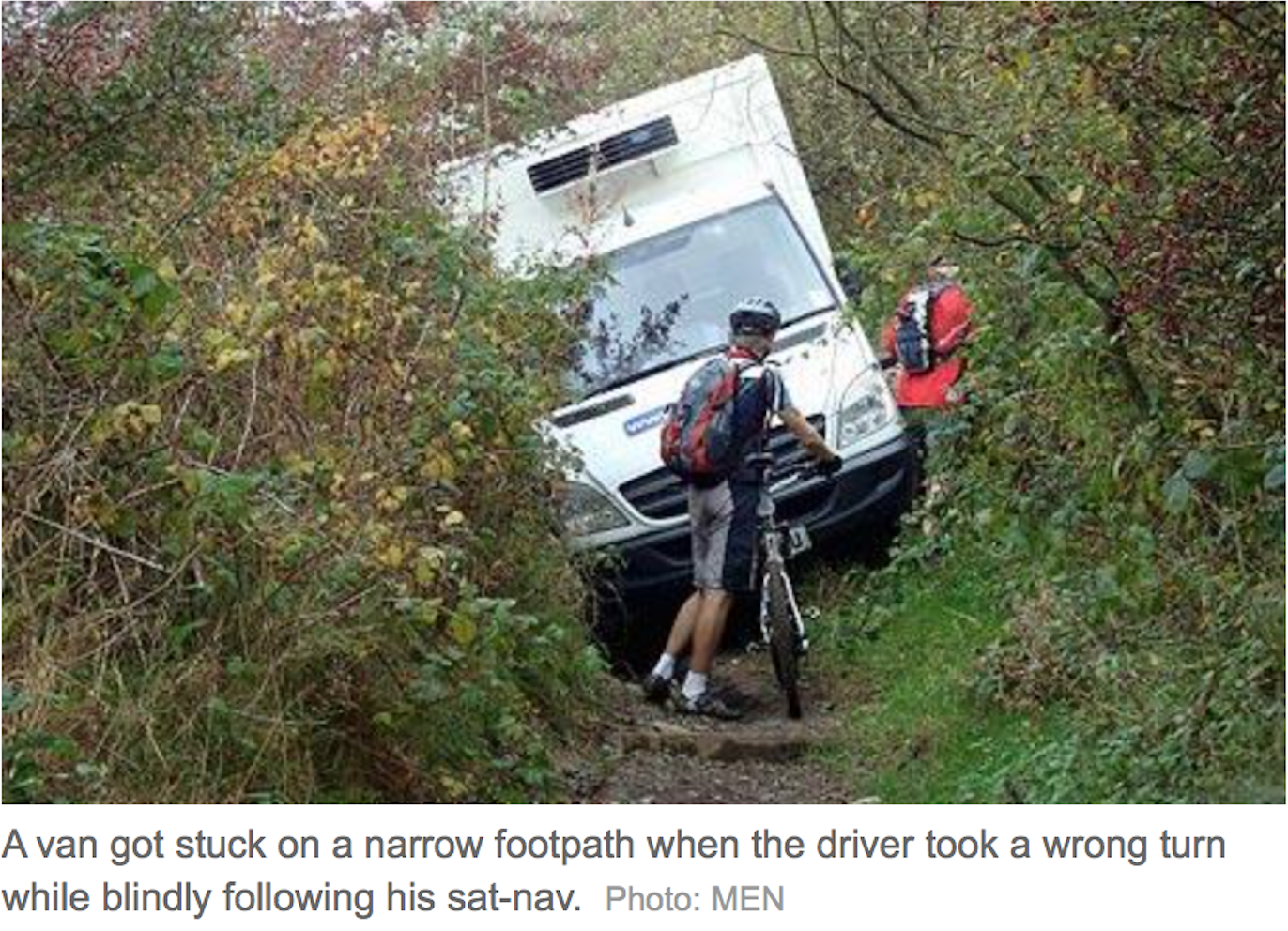 In the headline above, taken from the Telegraph newspaper, the driver trusted the SatNav to such an extent that he didn’t pay attention to the road-signs around him and ended up getting stuck.

This wasn’t borne of stupidity, but experience: SatNavs are pretty reliable. So many times the SatNav had been right, that the driver stopped questioning its fallibility.

There are two Map and Territory Risks here:

You could argue that both the SatNav and the Driver’s Internal Model had bugs in them. That is, they both suffer the Feature Implementation Risk we saw in the Feature Risk section. If a SatNav has too much of this, you’d end up not trusting it, and getting a new one. With your personal Internal Model, you can’t buy a new one, but you may learn to trust your assumptions less. 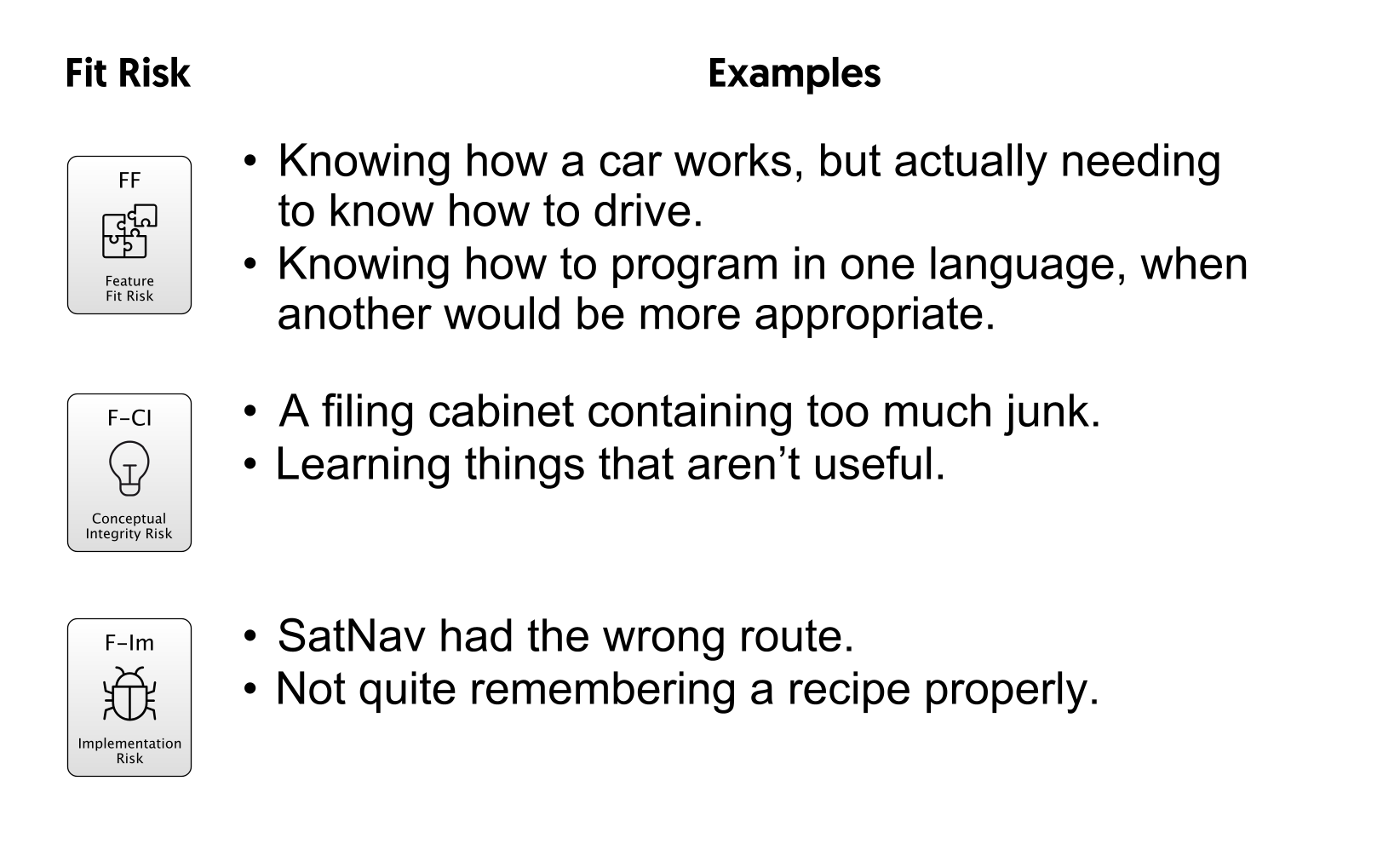 The diagram above shows how types of Feature Fit Risk can manifest in the Internal Model.

But how does Map and Territory Risk apply across a population of Internal Models? Can we track the rise-and-fall of ideas like we track stock prices? In effect, this is what Google Trends does. In the chart above, we can see the relative popularity of two search terms over time. This is probably as good an indicator as any of the changing popularity of an abstraction within an audience.

Most ideas (and most products) have a slow, hard climb to wide-scale adoption. But some ideas seem to disperse much more rapidly and are picked up quickly because they are exciting, having greater “memetic potential” within a population. One way this evolution manifests itself in the world is though the Hype Cycle:

“The hype cycle is a branded graphical presentation developed and used by the American research, advisory and information technology firm Gartner, for representing the maturity, adoption and social application of specific technologies. The hype cycle provides a graphical and conceptual presentation of the maturity of emerging technologies through five phases.” - Hype Cycle, Wikipedia 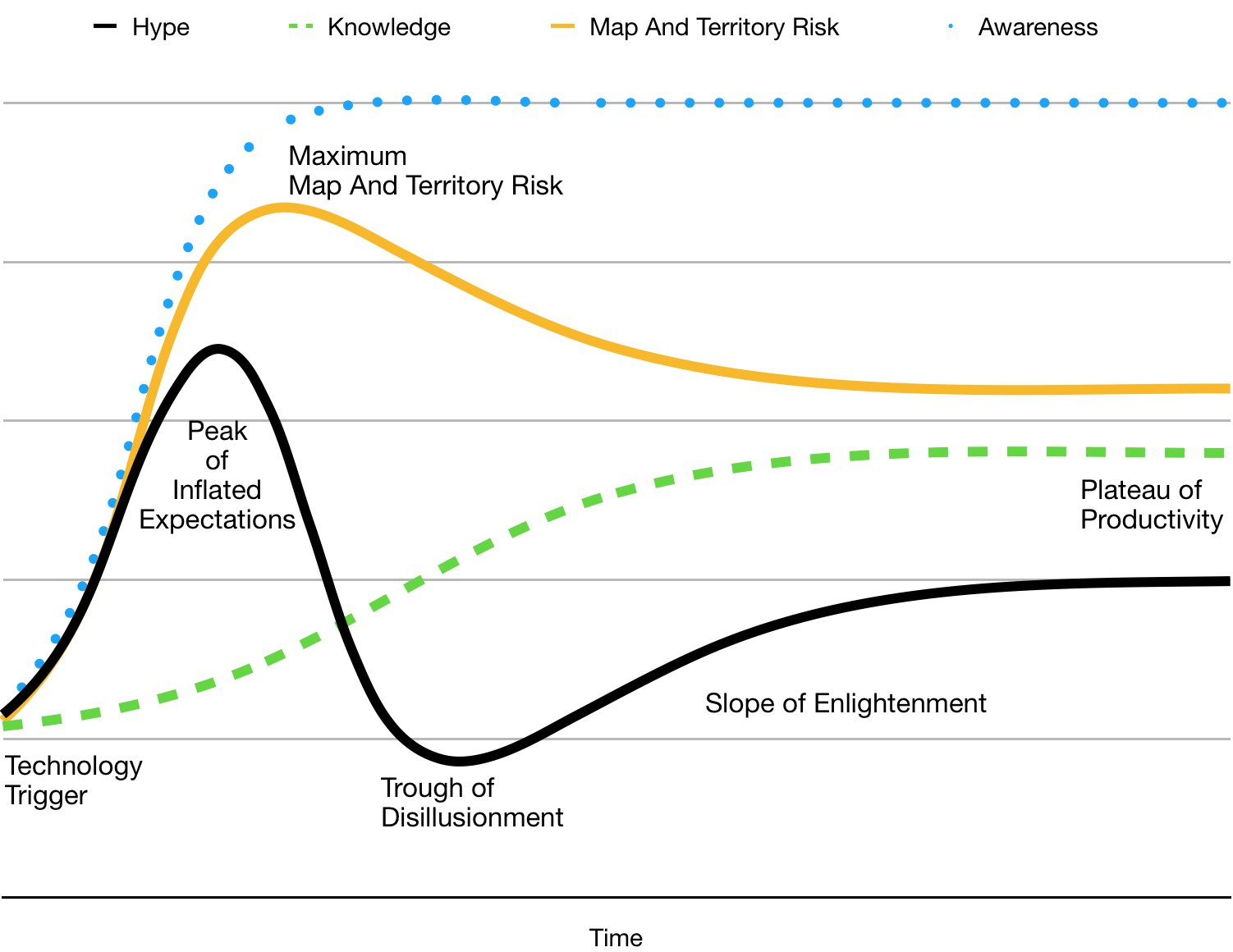 The five phases (and the “Hype” itself as the thick black line) are shown in the chart above. We start off at the “Technology Trigger”, moving to the “Peak of Inflated Expectations”, then to the “Trough of Disillusionment” and finally up the “Slope of Enlightenment” to the “Plateau of Productivity”.

The concept of Map and Territory Risk actually helps explain why this curve has the shape it does. To see why, let’s consider each line in turn: 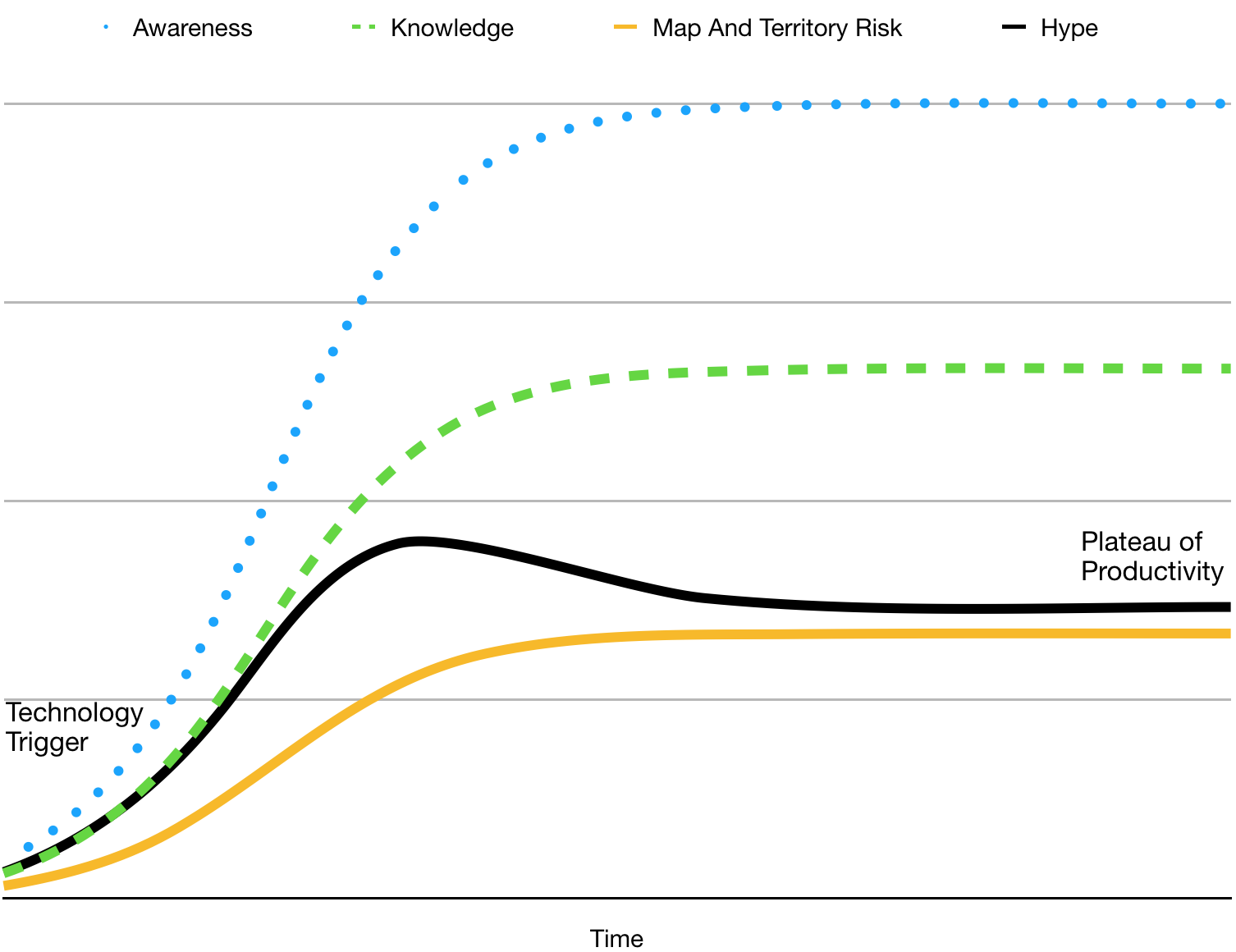 As you might expect, the “Trough of Disillusionment” exists because the Awareness of the idea and the Knowledge about it increase at different rates.

Where the Awareness and Knowledge grow more evenly together, there is no spike in Map and Territory Risk and we don’t see the corresponding “Trough of Disillusionment” at all, as shown in the above chart.

The diagram above shows how Audience-type Feature Risks can manifest in the Internal Model. (The Hype Cycle model is available in Numbers format here.)

So concepts and abstractions spread through an audience. But what happens next?

Let’s dive into a specific example now: someone finds a useful new metric that helps in evaluating performance.

With some skill, they may be able to correlate this metric against some other more abstract measure of success. For example:

Because the thing on the right is easier to measure than the thing on the left, it becomes used as a proxy (or, Map) for the thing they are really interested in (the Territory). At this point, it’s easy to communicate this idea with the rest of the team, and the market value of the idea is high: it is a useful representation of reality, which is shown to be accurate at a particular point in time.

But correlation doesn’t imply causation. The cause might be different:

Metrics are seductive because they simplify reality and are easily communicated. But they inherently contain Map and Territory Risk: by relying only on the metrics, you’re not really seeing the reality.

The devil is in the detail.

In the same way that markets evolve to demand more features, our behaviour evolves to incorporate new ideas. The more popular an idea is, the more people will modify their behaviour as a result of it, and the more the world will change.

In the case of metrics this is where they start being used for more than just indicators but as measures of performance or targets:

“Any observed statistical regularity will tend to collapse once pressure is placed upon it for control purposes.” - Goodhart’s Law, Wikipedia

Some of this seems obvious: Of course SLOC is a terrible measure performance! We’re not that stupid anymore. The problem is, it’s not so much the choice of metric, but the fact that all metrics merely approximate reality with a few numbers. The map is always simpler than the territory, therefore there can be no perfect metrics.

Will the idea still be useful as the world adapts? Although the Hype Cycle model doesn’t cover it, ideas and products all eventually have their day and decline in usefulness.

There are plenty of ideas which seem a really good idea at the time but then end up being terrible. It’s only as we improve our internal model and realize the hidden risks that we stop using them. While SLOC is a minor offender, CFCs or Leaded Petrol are more significant examples. 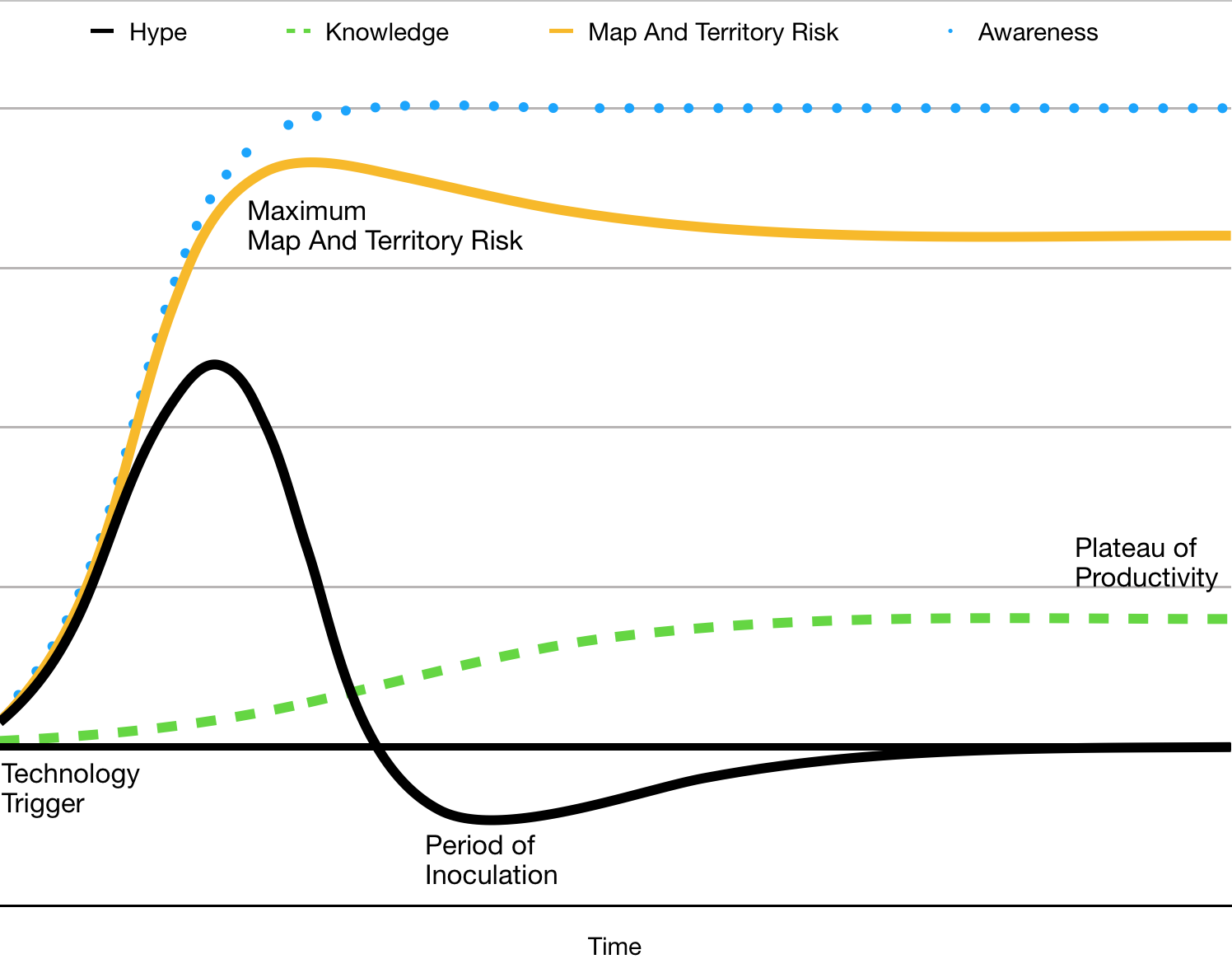 The above chart shows an initially promising idea that turns out to be terrible. That is, the Knowledge value of it ends up being significantly less than the Map and Territory Risk of using it. Hence, there is a “Period of Inoculation” where the population realise their mistake - there is “negative hype” as they work to phase out the offending idea until it’s forgotten.

SLOC is not on its own a bad idea, but using it as a metric for developer productivity is.

The diagram above shows how Evolution-type Feature Risks can manifest in the Internal Model.

In the example of the SatNav, we saw how the quality of Map and Territory Risk is different for people and machines. Whereas people should be expected show skepticism for new (unlikely) information our databases accept it unquestioningly. Forgetting is an everyday, usually benign part of our human Internal Model, but for software systems it is a production crisis involving 3am calls and backups.

For Humans, Map and Territory Risk is exacerbated by cognitive biases:

“Cognitive biases are systematic patterns of deviation from norm or rationality in judgement, and are often studied in psychology and behavioural economics.” - Cognitive Bias, Wikipedia

There are lots of cognitive biases. But let’s just mention some that are relevant to Map and Territory Risk:

Map And Territory Risk “trickles down” through an organisation. The higher levels have an out-sized ability to pervert the incentives at lower levels because once an organisation begins to pursue a “bullshit objective” the whole company can align to this.

The Huffington Post paints a brilliant picture of how Volkswagen managed to get caught faking their emissions tests. As they point out:

“The leadership culture of VW probably amplified the problem by disconnecting itself from the values and trajectory of society, by entrenching in what another executive in the auto industry once called a “bullshit-castle”… No engineer wakes up in the morning and thinks, OK, today I want to build devices that deceive our customers and destroy our planet. Yet it happened. Why? Because of hubris at the top. “ - Otto Scharmer, Huffington Post.

This article identifies the following process:

We’ve considered Map and Territory Risk for individuals, teams and organisations. Inadequate Equilibria by Eleizer Yudkovsky, looks at how perverse incentive mechanisms break not just departments, but entire societal systems. He highlights one example involving academics and grantmakers in academia:

“Now consider the system of scientific journals… Some journals are prestigious. So university hiring committees pay the most attention to publications in that journal. So people with the best, most interesting-looking publications try to send them to that journal. So if a university hiring committee paid an equal amount of attention to publications in lower-prestige journals, they’d end up granting tenure to less prestigious people. Thus, the whole system is a stable equilibrium that nobody can unilaterally defy except at cost to themselves.” - Inadequate Equilibria, Eleizer Yudkovsky

As the book points out, while everyone persists in using an inadequate abstraction, the system is broken. However, Coordination would be required for everyone to stop doing it this way, which is hard work. (Maps are easier to fix in a top-down hierarchy.)

Scientific journals are a single example taken from a closely argued book investigating lots of cases of this kind. It’s worth taking the time to read a couple of the chapters on this interesting topic. (Like Risk-First it is available to read online).

As usual, this section forms a grab-bag of examples in a complex topic. But it’s time to move on as there is one last stop we have to make on the Risk Landscape, and that is to look at Operational Risk.