In the previous sections on Dependency Risk we’ve touched on Boundary Risk several times, but now it’s time to tackle it head-on and discuss this important type of risk.

As shown in the above diagram, Boundary Risk is the risk we face due to commitments around dependencies and the limitations they place on our ability to change. To illustrate, lets consider two examples:

In terms of the Risk Landscape, Boundary Risk is exactly as it says: a boundary, wall or other kind of obstacle in your way to making a move you want to make. This changes the nature of the Risk Landscape, and introduces a maze-like component to it. It also means that we have to make commitments about which way to go, knowing that our future paths are constrained by the decisions we make.

As we discussed in Complexity Risk, there is always the chance we end up at a Dead End, having done work that we need to throw away. In this case, we’ll have to head back and make a different decision.

In software development, although we might face Boundary Risk choosing staff or offices, most of the everyday dependency commitments we have to make are around abstractions.

As discussed in Software Dependency Risk, if we are going to use a software tool as a dependency, we have to accept the complexity of its protocols. You have to use its protocol: it won’t come to you.

Let’s take a look at a hypothetical system structure, in the diagram above. In this design, we are transforming data from the input to the output. But how should we do it?

The choice of approach presents us with Boundary Risk because we don’t know that we’ll necessarily be successful with any of these options until we go down the path of committing to one:

This is a toy example, but in real life this dilemma occurs when we choose between database vendors, cloud hosting platforms, operating systems, software libraries etc. and it was a big factor in our analysis of Software Dependency Risk.

The degree of Boundary Risk is dependent on a number of factors:

Sometimes, one choice leads to another, and you’re forced to “double down” on your original choice, and head further down the path of commitment.

On the face of it, WordPress and Drupal should be very similar:

But crucially, the underlying abstractions of WordPress and Drupal are different, so the plugins available for each are different. The quality and choice of plugins for a given platform, along with factors such as community and online documentation, is often called its ecosystem:

“… a set of businesses functioning as a unit and interacting with a shared market for software and services, together with relationships among them. These relationships are frequently underpinned by a common technological platform and operate through the exchange of information, resources, and artifacts.” - Software Ecosystem, Wikipedia

You can think of the ecosystem as being like the footprint of a town or a city, consisting of the buildings, transport network and the people that live there. Within the city, and because of the transport network and the amenities available, it’s easy to make rapid, useful moves on the Risk Landscape. In a software ecosystem it’s the same: the ecosystem has gathered together to provide a way to mitigate various different Feature Risks in a common way.

Ecosystem size is one key determinant of Boundary Risk:

In the real world, there is a tendency for big cities to get bigger. The more people that live there, the more services they provide and need, and therefore, the more immigrants they attract. It’s the same in the software world too. In both cases, this is due to the Network Effect:

“… the positive effect described in economics and business that an additional user of a good or service has on the value of that product to others. When a network effect is present, the value of a product or service increases according to the number of others using it.” - Network Effect, Wikipedia

You can see the same effect in the software ecosystems with the adoption rates of WordPress and Drupal, shown in the chart above. Note: this is over all sites on the internet, so Drupal accounts for hundreds of thousands of sites. In 2018, WordPress is approximately 32% of all web-sites. For Drupal it’s 2%.

Did WordPress gain this march because it was always better than Drupal? That’s arguable. Certainly, they’re not different enough that WordPress is 16x better. That it’s this way round could be entirely accidental, and a result of Network Effect.

But, by now, if they are to be compared side-by-side, WordPress might be better due to the sheer number of people in this ecosystem who are…

But is bigger always better? Perhaps not.

When a tool or platform is popular, it is under pressure to increase in complexity. This is because people are attracted to something useful and want to extend it to new purposes. This is known as The Peter Principle:

“The Peter principle is a concept in management developed by Laurence J. Peter, which observes that people in a hierarchy tend to rise to their ‘level of incompetence’.” - The Peter Principle, Wikipedia

Although designed for people, it can just as easily be applied to any other dependency you can think of. This means when things get popular, there is a tendency towards Conceptual Integrity Risk and Complexity Risk. 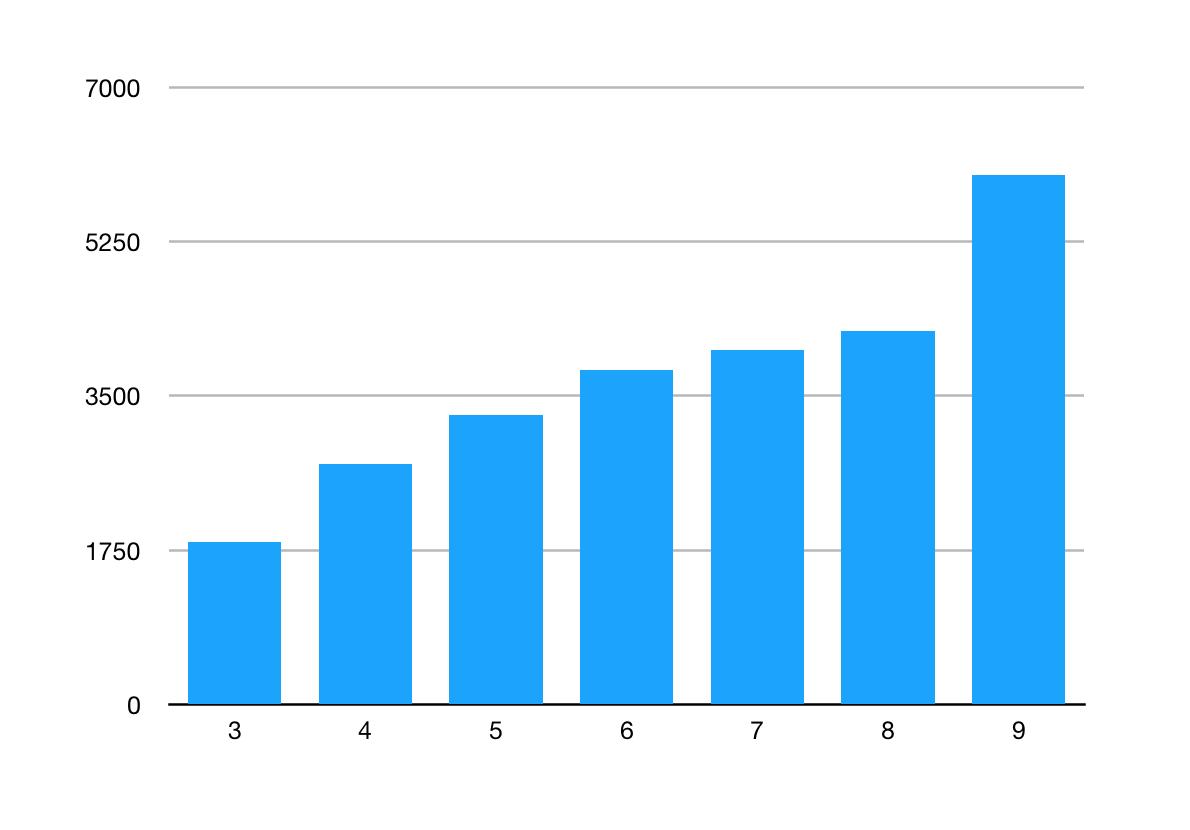 The above chart is an example of this: look at how the number of public classes in Java (a good proxy for the boundary) has increased with each release.

As we saw in Software Dependency Risk, The art of good design is to afford the greatest increase in functionality with the smallest increase in complexity possible, and this usually means Refactoring. But, this is at odds with Backward Compatibility.

Each new version has a greater functional scope than the one before (pushing back Boundary Risk), making the platform more attractive to build solutions in. But this increases the Complexity Risk as there is more functionality to deal with.

You can see in the diagram above the Peter Principle at play: as more responsibility is given to a dependency, the more complex it gets and the greater the learning curve to work with it. Large ecosystems like Java react to Learning Curve Risk by having copious amounts of literature to read or buy to help, but it is still off-putting.

Because Complexity is Mass, large ecosystems can’t respond quickly to Feature Drift. This means that when the world changes, new ecosystems are likely to appear to fill gaps, rather than old ones moving in.

Let’s look at two ways in which we can manage Boundary Risk: bridges and standards.

Sometimes, technology comes along that allows us to cross boundaries, like a bridge or a road. This has the effect of making it easy to to go from one self-contained ecosystem to another. Going back to WordPress, a simple example might be the Analytics Dashboard which provides Google Analytics functionality inside WordPress.

I find, a lot of code I write is of this nature: trying to write the glue code to join together two different ecosystems.

As shown in the above diagram, mitigating Boundary Risk involves taking on complexity. The more Protocol Complexity there is on either side of the two ecosystems, the more complex the bridge will necessarily be. The below table shows some examples of this.

From examining the Protocol Risk at each end of the bridge you are creating, you can get a rough idea of how complex the endeavour will be:

Standards mitigate Boundary Risk in one of two ways:

Although ecosystems are one very pernicious type of boundary in software development, it’s worth pointing out that Boundary Risk occurs all the time. Let’s look at some ways:

In Feature Risk, we saw that the features people need change over time. Let’s get more specific about this:

The only thing we can expect in the future is that the lifespan of any ecosystem will follow the arc shown in the above diagram, through creation, adoption, growth, use and finally either be abstracted over or abandoned.

Although our discipline is a young one, we should probably expect to see “Software Archaeology” in the same way as we see it for biological organisms. Already we can see the dead-ends in the software evolutionary tree: COBOL and BASIC languages, CASE systems. Languages like FORTH live on in PostScript, SQL is still embedded in everything

Let’s move on now to the last Dependency Risk section, and look at Agency Risk.