The diagram above shows this behaviour in the form of a Risk-First Diagram. Put briefly: risks (Schedule Risk, Feature Risk) are addressed by actions such as “Development”, “Review” or “Planning Poker”.

If you’re new to Risk First then it’s probably worth explaining at this point that one of the purposes of this project is to enumerate the different types of risk you could face running a software project. You can begin to learn about them all here. Suffice to say, we have icons to represent each of these kinds of risks, and the rest of this article will introduce some of them to you in passing.

On a Risk-First diagram, when you address a risk by taking an action, you draw a line through the risk.

Estimating Is A Poor Tool

Seen like this, Planning Poker is a tool to avoid the Coordination Risk problem of everyone needing to complete their work for the end of the Sprint. But estimating is really hard: In this track so far we’ve looked at three different ways in which software estimation deviates from the straightforward extrapolation (a.k.a, Fill-The-Bucket) we learnt about in maths classes at school:

As a result, Sprints can often get derailed by poor estimating.

Scrum: The “cure” of estimating is worse than the “disease” of wasting stake-holder time.

As shown in the above diagram, the emphasis on estimating as a way to plan sprints means that our measure of success is at the mercy of our ability to estimate. Trust in a team can be eroded not by their failure to “do engineering” but their failure to meet self-imposed deadlines. As a result, we end up with some unintended consequences, as shown in the table below.

How can we convert a planning session away from being estimate-focused and back to delivering us useful insights about what we are building? We want a tool that promotes the following:

I’m going to suggest a different approach to planning, which allows you to focus both on short-term goals and long term ones at the same time.

I’ll walk through what this looks like by example to show how it works and then we can see if it addresses some of the issues with Scrum planning we’ve looked at.

In the diagram above, there are four tasks pulled off the backlog for consideration. (Obviously, we’re keeping this simple - you might be looking at plenty more than this in a big team). We’ve got four simple ones for our product here:

As it stands, it is impossible to say what we should be tackling next. In order to get to that, we have to answer three questions first. Let’s look at those.

Question 1: What Do We Lose?

On a Risk-First diagram, tasks - or actions as we call them - are shown in “sign-post” style boxes, as shown above.

By fixing the rendering bug, we are trying to deal the problem that the software demos badly and the resulting risk that the potential customers don’t trust the quality of our product. Risk-First diagrams show chronology from left-to-right. That is, on the left of the action is the world as it is now, whereas on the right is the world as it will be after taking some action. To show that our action will eliminate some existing risk, we can strike it out by drawing a line through it.

So, this diagram encapsulates the reason why we might fix the rendering bug: it’s about addressing potential Trust Risk in our product.

Question 2: What Do We Gain?

Let’s move on to task 2, the Search Function, as shown in the above diagram.

As with the Rendering Bug, above, we lose something: Feature Risk, which is the risk (to us) that the features our product is supplying don’t meet the client’s (or the market’s) requirements. Writing code is all about identifying and removing Feature Risk, and building products that fit the needs of their users.

So as in the Rendering Bug example, we can show Feature Risk being eliminated by showing it on the left with a strike-out line. However, it’s been established during analysis that the way to implement this feature is to introduce ElasticSearch, a third-party piece of software. This in itself is an Attendant Risk of taking that action:

If an action leads to new risks, show them on the right side of the action.

So, on the right side of the action, we are showing the Attendant Risks we gain from taking the action.

Question 3: What Is The Payoff?

If we know what we lose and what we gain from each action we take, then it’s simple maths to work out what the best actions to take on a project are: simply pick the ones with the greatest Payoff (as shown in the above diagram).

It’s worth noting - not all risks are bad! Upside Risk captures this concept well. If I buy a lottery ticket, there’s a big risk that I’ll have wasted some money buying the ticket. But there’s also the Upside Risk that I might win! Both upside and downside risks should be captured in your analysis of Payoff.

The diagram above lays these out: We’ll work hard to improve the probability of Goals and Upside Risks occurring, whilst at the same time taking action to prevent Anti-Goals and Downside Risks.

(There’s a gentle introduction to the idea of Anti-Goals here which might be worth the diversion).

Let’s go on to the third action, Refactoring Subscriptions to see this in action. 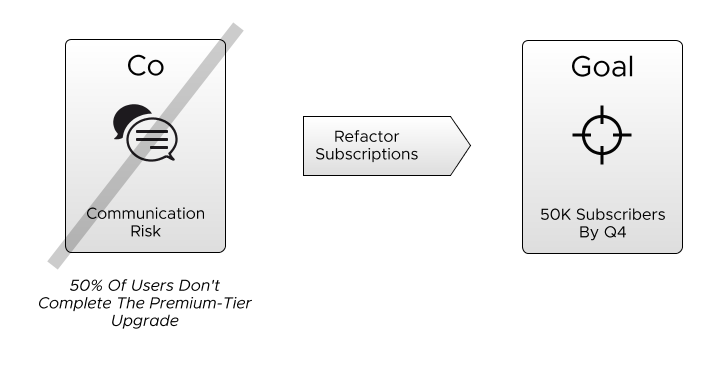 In the above diagram, we are showing that by removing Communication Risk around our product, we are improving our chances of reaching the goal of 50K subscribers. That’s a big assumption - it could well be that the users don’t complete the upgrade for other reasons. Maybe they find out the price during the upgrade and are put off, or they are being forced onto the upgrade screen by some dark patterns, but actually have no intention of upgrading the product at all.

Let’s look at the last example: the action to fix the Continuous Integration Pipeline. A lot of development teams might consider this a no-brainer: “How can we possibly do useful work with an unreliable process?” Equally, a lot of product owners might feel the opposite: “why is the Development Team spending time on making their own lives easier when we have a marketing event next week and there are incomplete features?”

On the face of it, it’s clear why the Sales Team might feel annoyed - there is a transfer of risk away from the Development Team to them. That’s not fair! But the Development Team Lead might counter by saying: “Look, this issue is slowing down development, which might mean this startup runs out of funding before the product is ready for launch. Plus it’s causing a loss of morale in our team and we’re having trouble retaining good staff as it is”.

The above diagram models that. Fixing the CI Pipeline is now implicated in reducing Staff Risk, Coordination Risk and Funding Risk for the whole business and therefore seems like it might have a better Payoff.

But is that a fair assessment? How would you determine the Payoff in this situation? It’s clear that even though we might be able to describe the risks, it might not be all that easy to quantify them.

Luckily, we don’t really have to. If I am trying to evaluate a single action on my own, all I really need to do is answer one question: do I lose more risk than I gain?

All I need to do is “weigh up” the change in risks as best as I can. A lot of the time, the Payoff will be obviously worth it, or obviously not.

So far, we’ve been looking at each task individually, working out which risks we’re addressing, and which ones we’re exposed to as a result. If you have plenty of spare talent and only a few tasks, then maybe that’s enough and you can get to work on all the tasks that have a positive Payoff. But if you’re constrained, then you should be hunting for the actions with the biggest Payoff and doing those first.

Things change too when you have a whole team engaged in the planning process. Although people will generally agree on what the risks are, they often will disagree on the Probability they will occur, or the impact if they do. In cases like these, you might want to allow each stakeholder to “vote up” the risks they consider significant, or vote up the actions they consider to have high Payoff. This will be covered in further detail in the next section.

But for now, let’s talk about in which ways this is better or worse than Planning Poker.

Some Points To Note

At this point, you might be thinking “this is a lot of work compared to Planning Poker, where I just have to pull a number out of my a**e every few minutes, representing how hard something is to do”. Well, yes. I’m not going to sugar-coat this: product planning is actually really hard.

What we’ve developed here is a way to visually represent the trade-offs in the decision making process, so that we can engage the whole team in discussing them and charting the right developmental course.

This is Just Design

The model we are describing here is just a graphic representation of a discussion. It doesn’t represent some “ground truth” about what to develop next - it merely gets everyone onto the same page to discuss what happens next.

One argument made for the Scrum planning game is that it gives everyone on the development team a voice. For many, this might be the biggest contribution of Planning Poker and we definitely don’t want to lose that.

We’ve not looked at how Risk-First Analysis can be gamified in the way that Planning Poker is - we’ll get to that. But first, let’s look in more detail at the Story Point idea and see if it can be improved.