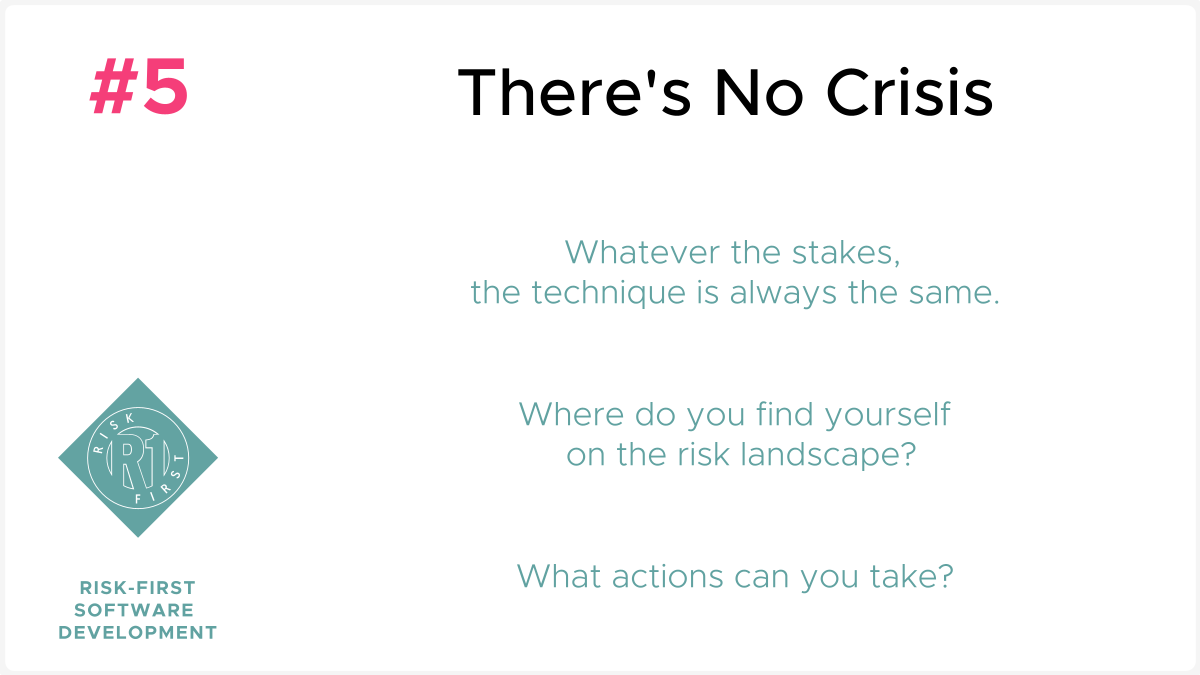 Let’s look at a classic description of Risk Management:

“Risk Management is the process of thinking out corrective actions before a problem occurs, while it’s still an abstraction. The opposite of risk management is crisis management, trying to figure out what to do about the problem after it happens.” - Waltzing With Bears, De Marco, Lister

This is not how Risk-First sees it.

First, we have the notion that Risks are discrete events. Some risks are (like gambling on a horse race), but most aren’t. In the Dinner Party, for example, bad preparation is going to mean a worse time for everyone, but how good a time you’re having is a spectrum, it doesn’t divide neatly into just “good” or “bad”.

Third, Crisis Management is still just Risk Management: the crisis (Earthquake, whatever) has happened. You can’t manage it because it’s in the past. All you can do is Risk Manage the future (minimize further casualties and human suffering, for example).

Yes, it’s fine to say “we’re in crisis”, but to assume there is a different strategy for dealing with it is a mistake: this is the Fallacy of Sunk Costs.

You would expect that any methods for managing software delivery should be invariant to the degree of crisis in the project. If, for example, a project proceeds using Scrum for eight months and then the deadline looms and everyone agrees to throw Scrum out of the window and start hacking, then this implies there is a problem with Scrum and that it is not Panic Invariant. In fact, many tools like Scrum don’t consider this:

In these cases, we (hopefully calmly) evaluate the risks and Take Action.

This is Panic Invariance: your methodology shouldn’t need to change given the amount of pressure or importance on the table.

We are used to the idea that physical laws work at any scale: if they don’t apply equally to big and small scenarios then that implies something is wrong. For example, Newton’s Laws of Motion work fine for artillery shells but fail to calculate the orbital period of Mercury, which led to Einstein trying to improve on them with the Theory of Relativity.

Ideally, a methodology should be applicable at any scale too:

In practice, however, we usually find methodologies are tuned for certain scales. For example, Extreme Programming (XP) is designed for small, co-located teams and that’s useful. But the fact it doesn’t scale tells us something about it: chiefly, that it considers certain kinds of risk, while ignoring others. At small scales XP works ok, but at larger scales other risks (such as team Coordination Risk) increase too fast for it to work.

If the methodology fails at a particular scale this tells you something about the risks that the methodology isn’t addressing. One of the things Risk-First explores is trying to place methodologies and practices within a framework to say when they are applicable.

But often, the urgent can crowd out the merely important. Why does that happen, and what should we do about it?

In the next section, Evaluating Risk we’ll look at some approaches to choosing what to do.