Let’s look at some tools to help us decide when to do “urgent” work vs. when to do “important” work. 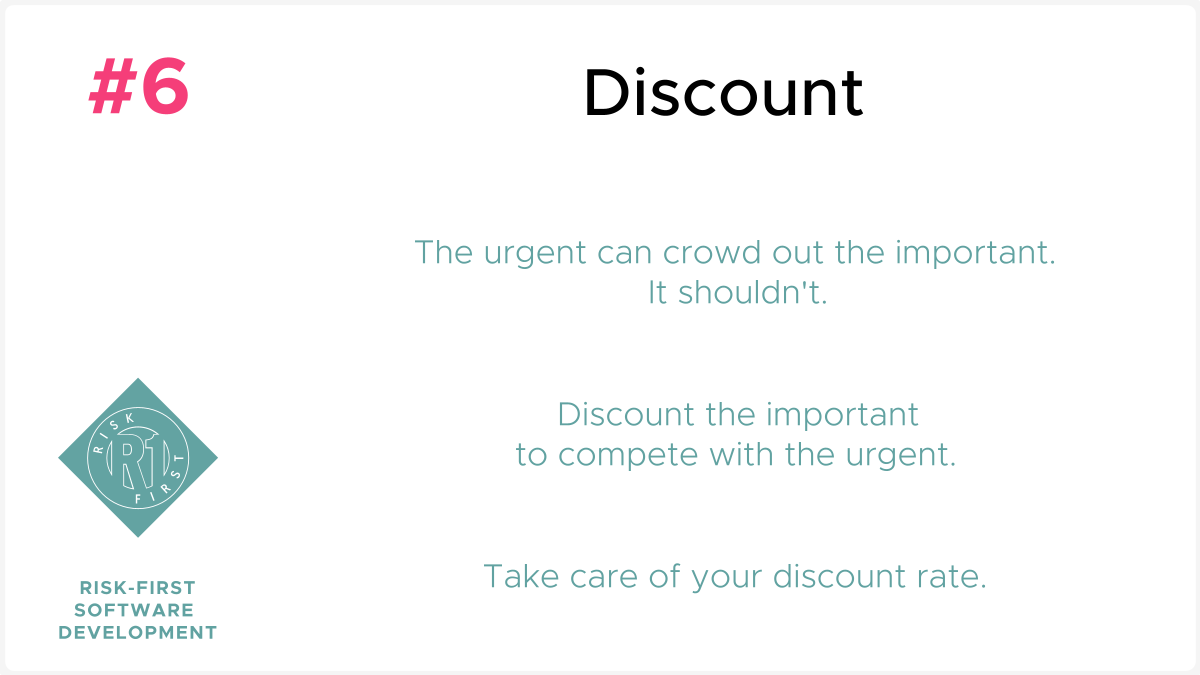 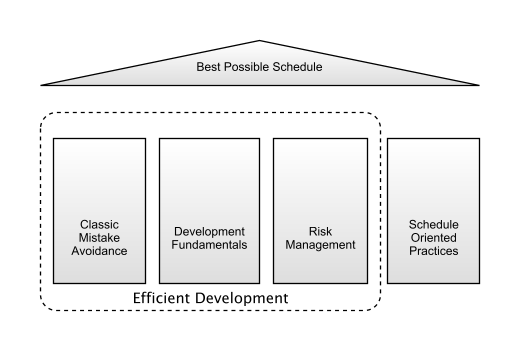 The diagram above reproduces a figure from Rapid Development by Steve McConnell. This is fine: McConnell is structuring the process from the perspective of delivering as quickly as possible. However, here, I want to turn this on its head. Software Development from a risk-perspective is an under-explored technique and I believe it offers some useful insights. So the aim here is to present the case for viewing software development like this: 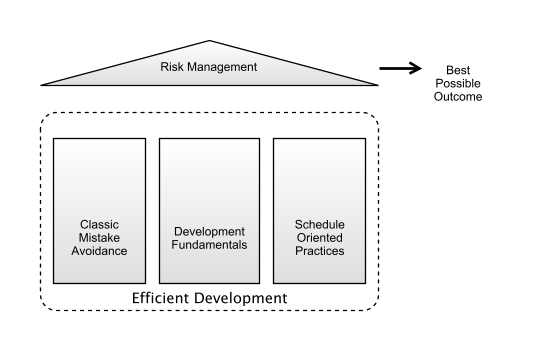 As we will see, Speed (or Schedule Risk as we will term it) is one risk amongst others that need to be considered from a risk-management perspective. There’s no point in prioritising speed if the software fails in production due to Operational Risk issues and damages trust in the product.

Eisenhower’s Box is a simple model allowing us to consider two aspects of risk at the same time:

We can use Net Present Value to discount value in the future, which offers us a way to reconcile these two variables. The further in the future the value is realised, the bigger the discount. This is done because payment now is better than payment in the future: there is the risk that something will happen to prevent that future payment. This is why we have interest rates on loan payments. 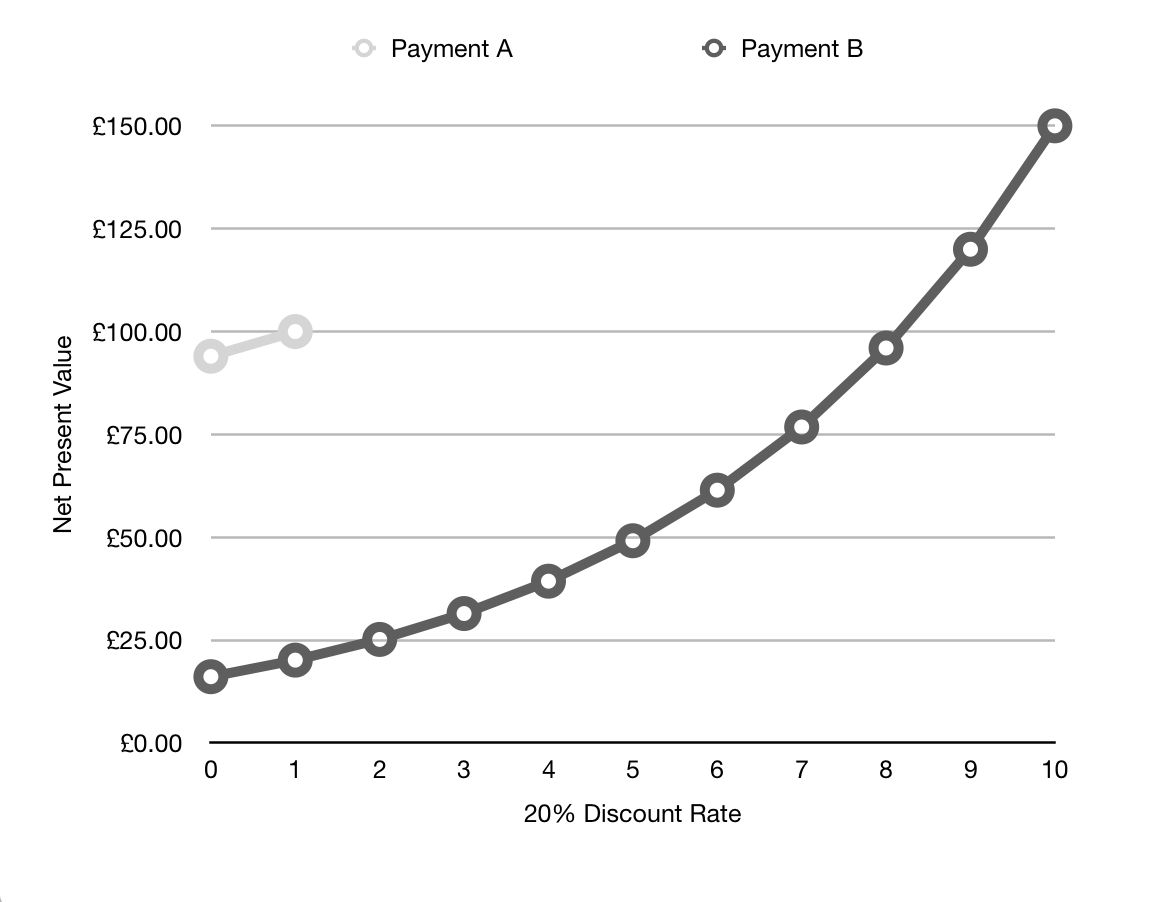 In the diagram above, you can see two future payments: Payment A of £100 due in one year, and Payment B of £150 due in 10 years. By discounting at a given rate (here at a high rate of 20% per year) we can compare their worth now. At this discount rate, Payment A - arriving next year - has a far greater value.

Can we do the same thing with risk? Let’s introduce the concept of Net Present Risk, or NPR:

Net Present Risk is the Impact of a Future risk, discounted to a common level of Urgency.

Let’s look at a quick example to see how this could work out. Let’s say you had the following risks: 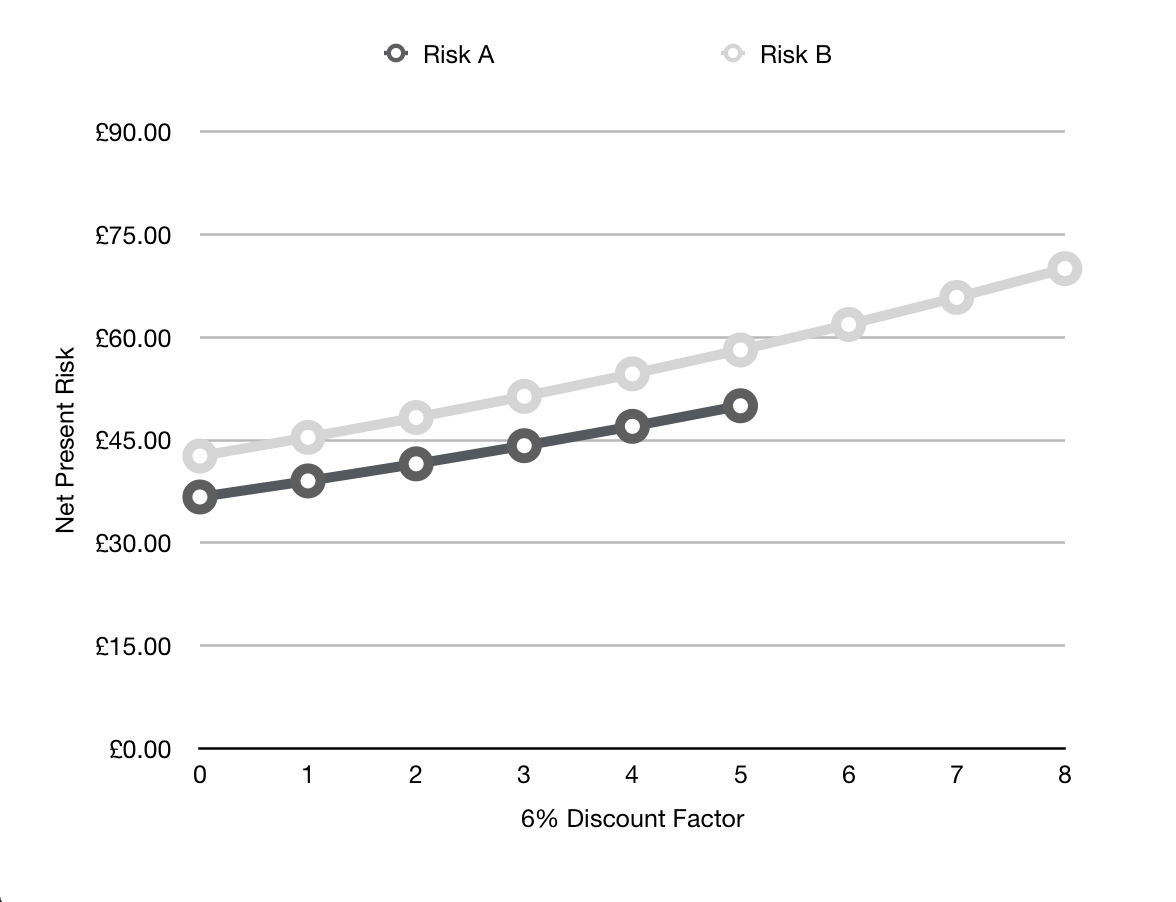 Which has the biggest NPR? Well, it depends on the discount rate that you apply. The graph above assumes we are discounting at 6% per day. On this basis, the biggest NPR is B, at about £45. 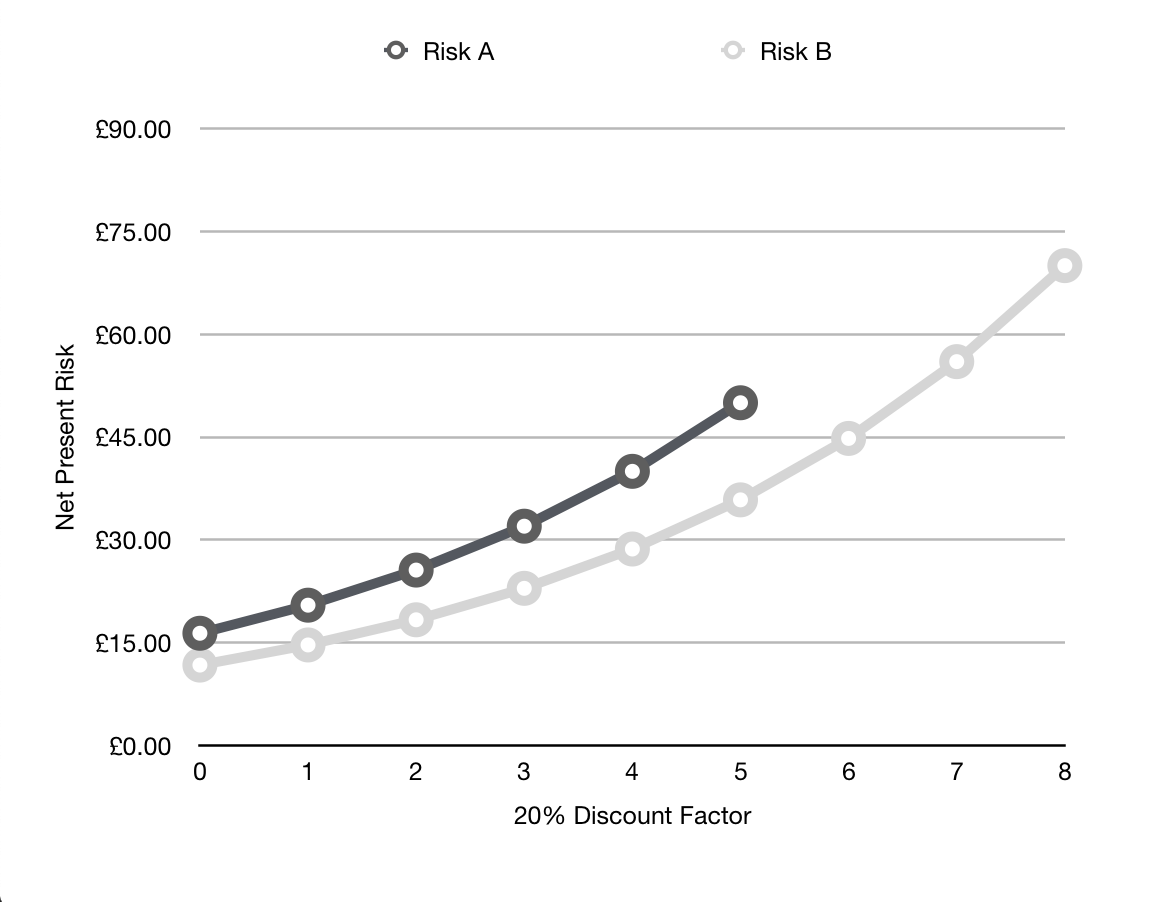 However, the graph above increases the discount factor to 20% and we get a different result: Now, risk A is bigger.

Because this is Net Present Risk, we can also use it to make decisions about whether or not to mitigate risks. Let’s assume the cost of mitigating any risk right now is £40. Under the 6% regime, only Risk B is worth mitigating today, because you spend £40 today to get rid of £45 of risk (today).

Under the 20% regime, neither are worth mitigating. The 20% Discount Rate may reflect that sometimes, future risks just don’t materialise.

Discounting the Future To Zero

I have worked in teams sometimes where the blinkers go down and the only thing that matters is now. Anything with a horizon over a week is irrelevant. Regimes of such hyper-inflation are a sure sign that something has really broken down within a project. Consider in this case a Discount Factor of 60% per day, and the following risks:

Risk B is almost irrelevant under this regime, as this graph shows: 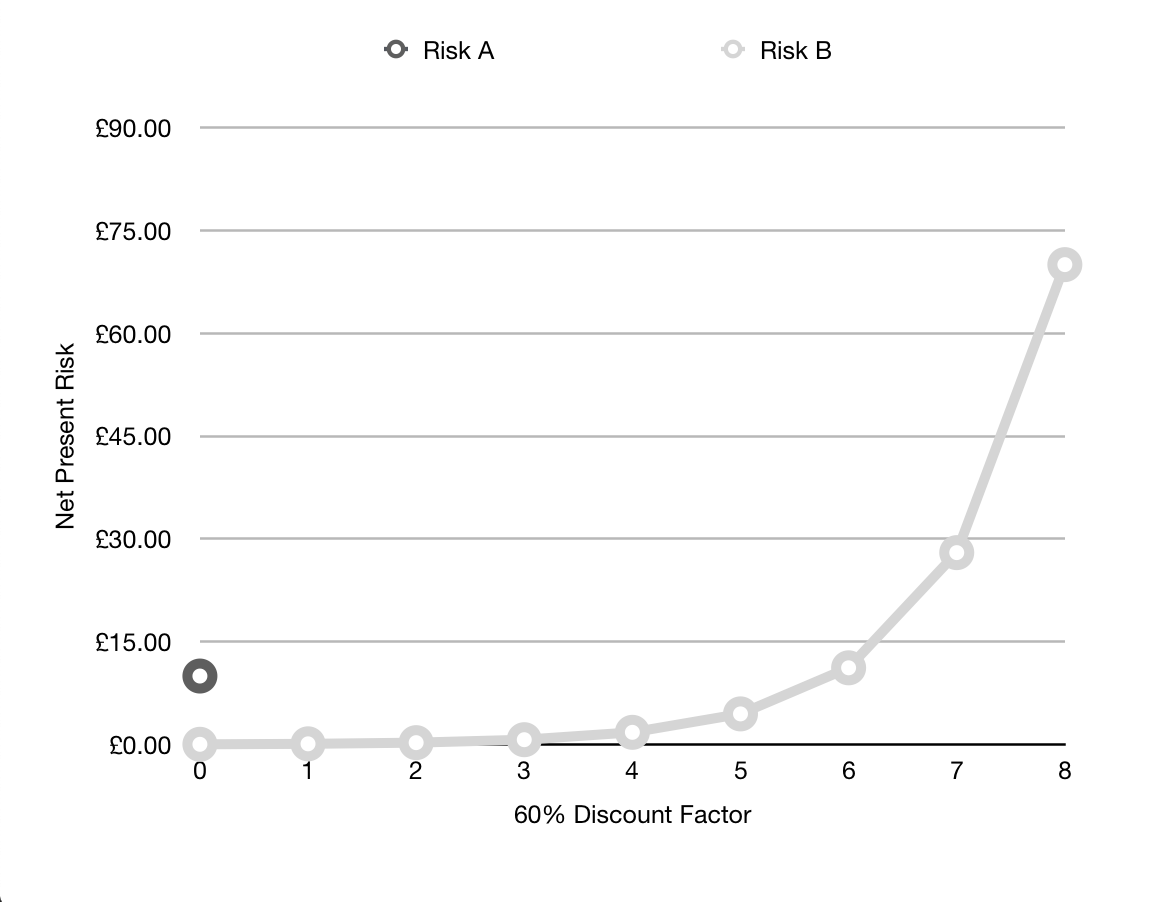 Why do things like this happen? Often, the people involved are under incredible job-stress: usually they are threatened on a daily basis and therefore feel they have to react. In a similar way, publicly-listed companies also often apply short-term focus because they only care about the next annual report. That limits their horizons and ability to consider future risk.

Under these circumstances, we often see Pooh-Bear Procrastination:

“Here is Edward Bear coming downstairs now, bump, bump, bump, on the back of his head, behind Christopher Robin. It is, as far as he knows, the only way of coming downstairs, but sometimes he feels that there really is another way…if only he could stop bumping for a moment and think of it!” - A. A. Milne, Winne-the-Pooh

Enough with the numbers and the theory: we need a practical framework, rather than a scientifically rigorous analysis. For software development, you should probably give up on trying to compute risk numerically. You can’t work out how long a software project will take based purely on an analysis of (say) function points. (Whatever you define them to be).

Reality is messy. Dressing it up with numbers doesn’t change that and you risk fooling yourself. If this is the case, is there any hope at all in what we’re doing? Yes: forget precision. You should, with experience, be able to hold up two separate risks and answer the question, “is this one bigger than this one?”