In The Purpose Of The Development Team we looked at how a development team is all about trying to shift the risk profile in favour of the business. Perhaps by removing the risk of customers not having the features they want, or not signing up, or not learning about the product.

Then, in Coding Bets we considered the same thing at task level. That is, in choosing to spend time on a given task we are staking our time to improve our risk position. And, it’s definitely a bet, because sometimes, a piece of coding simply doesn’t end up working the way you want.

Now, we’re going to consider the exact same thing again but from the point of view of debugging. I’ve been waiting a while to write this, because I’ve wanted a really interesting bug to come along to allow me to go over how you can apply risk to cracking it.

Luckily one came along today, giving me a chance to write it up and go over this. If you’ve not looked at Risk-First articles before, you may want to review Risk-First Diagrams Explained, since there’ll be lots of diagrams to demonstrate the bets I’m making.

Symphony is a secure chat platform used mainly by banks. I have been writing an app (“Tables App”) which runs within Symphony and allows you to share and edit tabular data with people in a chat room. It’s a nice little piece of functionality, allowing banks and their clients to sign off on things in tables (like purchase orders) imported from Excel. This is way more elegant than email trails.

In order to make this work, we made use of functionality within Symphony called “On-Behalf-Of”, which allows Tables App to post messages as a user, if the user has given prior authorisation. 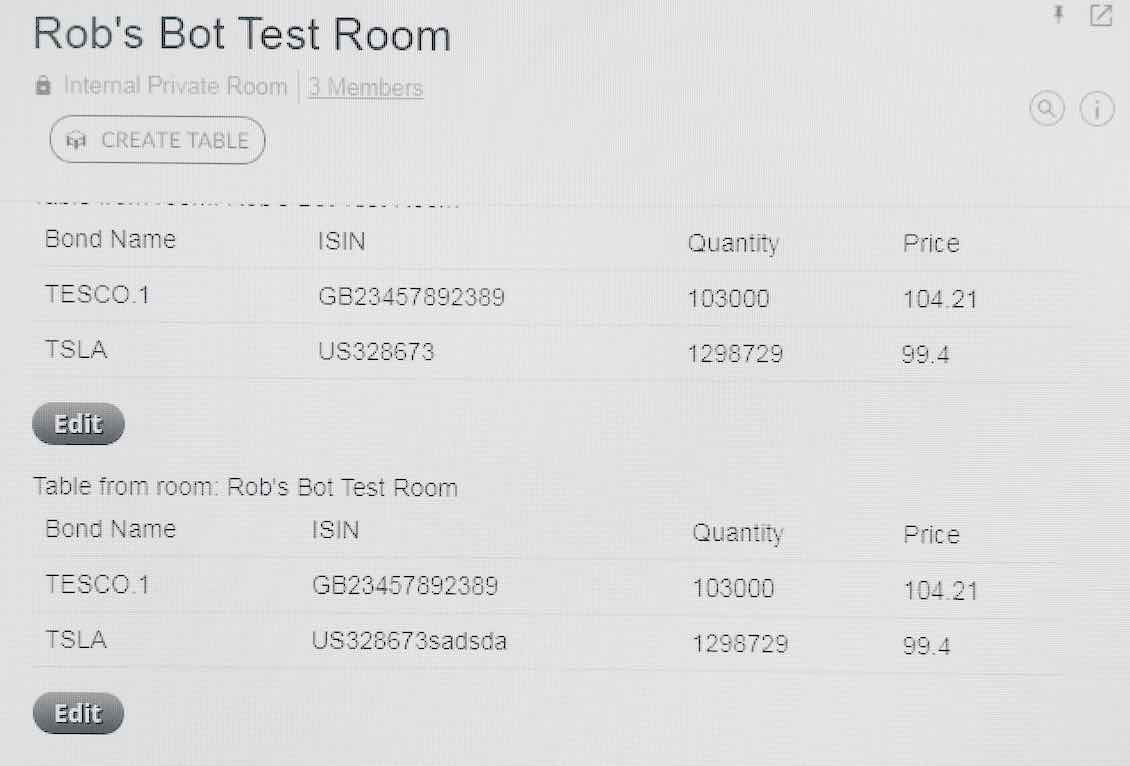 But something wasn’t working - whenever I clicked “post” - no table!

To make matters worse, I was supposed to be doing a presentation on this within two hours. I’d need to make good use of my available time.

So, what is supposed to happen? 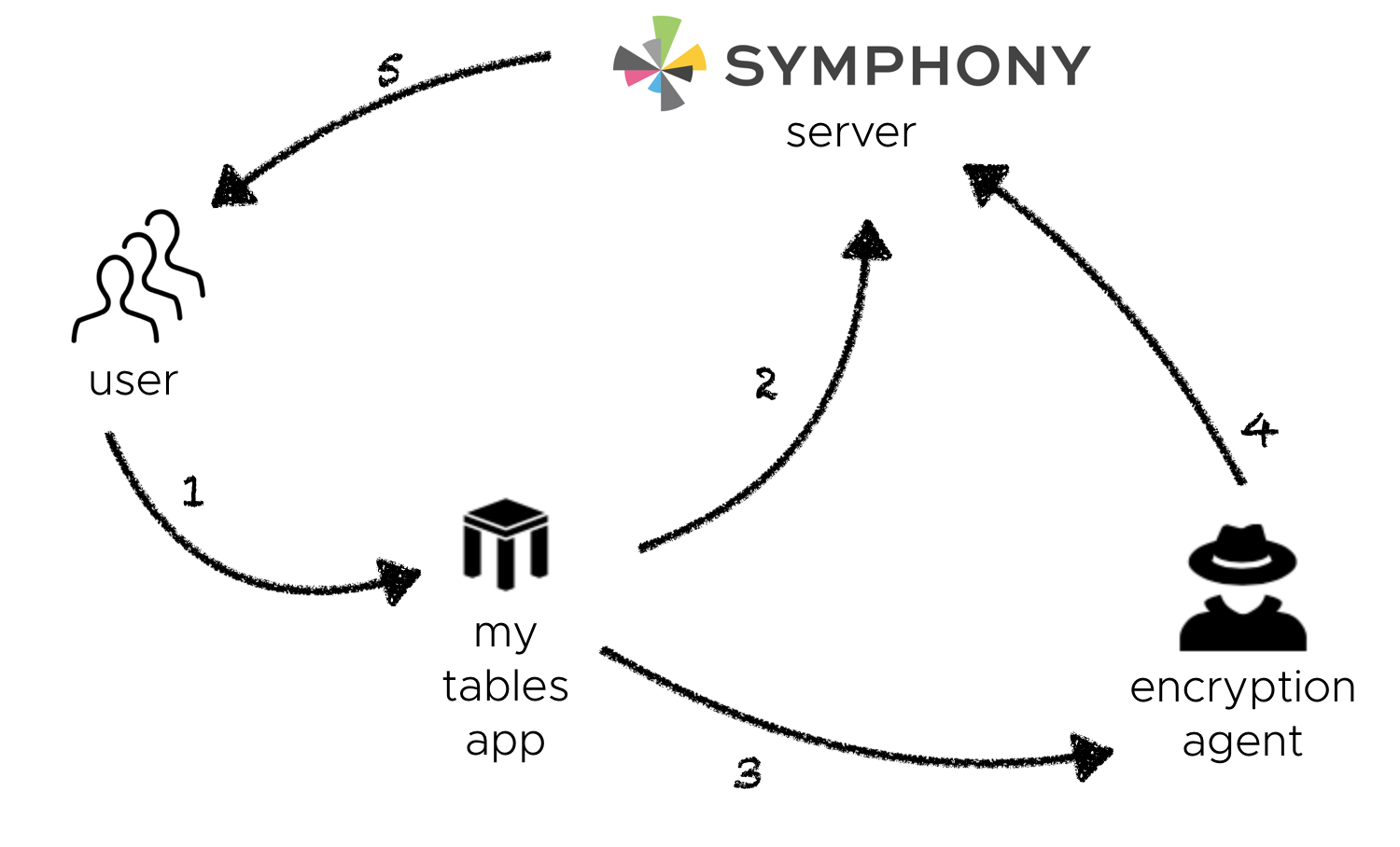 However, things go south around step 4: I see the On-Behalf-Of token in Tables App, but using it with the Encryption Agent fails.

For now, I ignored those voices in my head. I wanted to use my limited time wisely, so first, I enumerated what I did know:

In order to generate the list of hypotheses, you have to find the last-known good place, and work forward through all the steps after that that could have failed. So this is what I came up with:

Were there other things that could have gone wrong? Maybe, but they didn’t occur to me at that point in time. Could there be multiple things going wrong? Quite likely.

If we test each hypothesis, we learn something about the system. But that has a (time) cost: I had a limited amount of time to try and learn as much as possible.

Although H1 was unlikely (and therefore I probably wasn’t going to learn much) it was really easy to test. All I needed to do was try the curl command again with a deliberately broken token. What would the message be? What came back was a 401 error - unauthorised. So it definitely wasn’t H1, because the error message was different.

H6 / H7 were a fairly easy thing to check. I could fire up the server locally and test the code there. I did this and discovered the certificate problem persisted. I tinkered around a bit with the code, and eventually, it went away. Instead, I got the curl “not able to obtain session” error message.

So, although I did have an issue with certificates, it wasn’t the main problem, just a side-show. H6 was now ruled out.

Since the code was returning the same result locally and on the server, that really ruled out H7. Also H2 was ruled out, because the server ran really fast - there wasn’t time for the token to expire.

Down to just H3,H4 and H5. I had definitely seen On-Behalf-Of working two weeks’ ago, but in that other app. A fairly quick thing to do would be to try and post the message with that other app, but it wasn’t installed. Instead, I could try my same code out again, but using the other app’s identity. I did this, and lo! I still get the “not able to obtain session” error.

This ruled out H3. But there was still a chance I was creating the token wrongly (H5).

If I could use this token for an an On-Behalf-Of operation on the Symphony Server (rather than the Encryption Agent), it would prove the token was good, and rule out H5.

This was another simple thing to test, since all I had to do was call a “Room Lookup” function on the Symphony Server, something that didn’t need encryption, and therefore use the Encryption Agent. Now, although Tables App couldn’t do this (fact 4), my other app could, so I could continue with the new identity and try that.

Sadly, this meant that I’d actually had to test and rule out all of the other hypotheses in order to arrive at the correct one (H4). I guess it happens. And the problem at this point is that I can’t fix it on my own: although I found (and fixed) a certificates-related bug in my own code, this one is going to require some support calls. So, this is a bad outcome: I couldn’t do the presentation but I did manage to figure this all out within an hour.

I have a feeling that this is really the process I use for every bug, whether I am conscious of it or not: generating hypotheses, ruling some of them out by comparing to the facts I know, and then testing the remaining ones. However, I think most of the time (maybe as a result of being a developer for a long period) I don’t have to do this consciously. It just happens.

Also, I am super-lazy. I’m always trying to rule of out the hypotheses with the least effort. Usually, that means lashing together some arrangement of stuff just so see what happens (like the switching identities stuff above). If testing a hypothesis starts to look onerous, I’ll try and find some clever trick to reduce that effort.

Perhaps you have a different process? Is there another one? I’d really like to know about it if so. Please join the GitHub Risk-First team and tell me about it!

In the next (currently unwritten) article, we’ll bring this home by looking at testing, and look at the similarities across all of these different practices.