RPA or Robotic Process Automation is everywhere at the moment.

We need this because, as we discussed before, The Crystal Is Always Cracked: we can never have comprehensive, consistent and wide-scale Information Systems (IS’s). You can pick any two of these, but all three at the same time is impossible. This is because the larger the IS, the more difficult it is to change.

But joining up IS’s is important. Let’s summarise four of the big themes (with examples) before moving on: 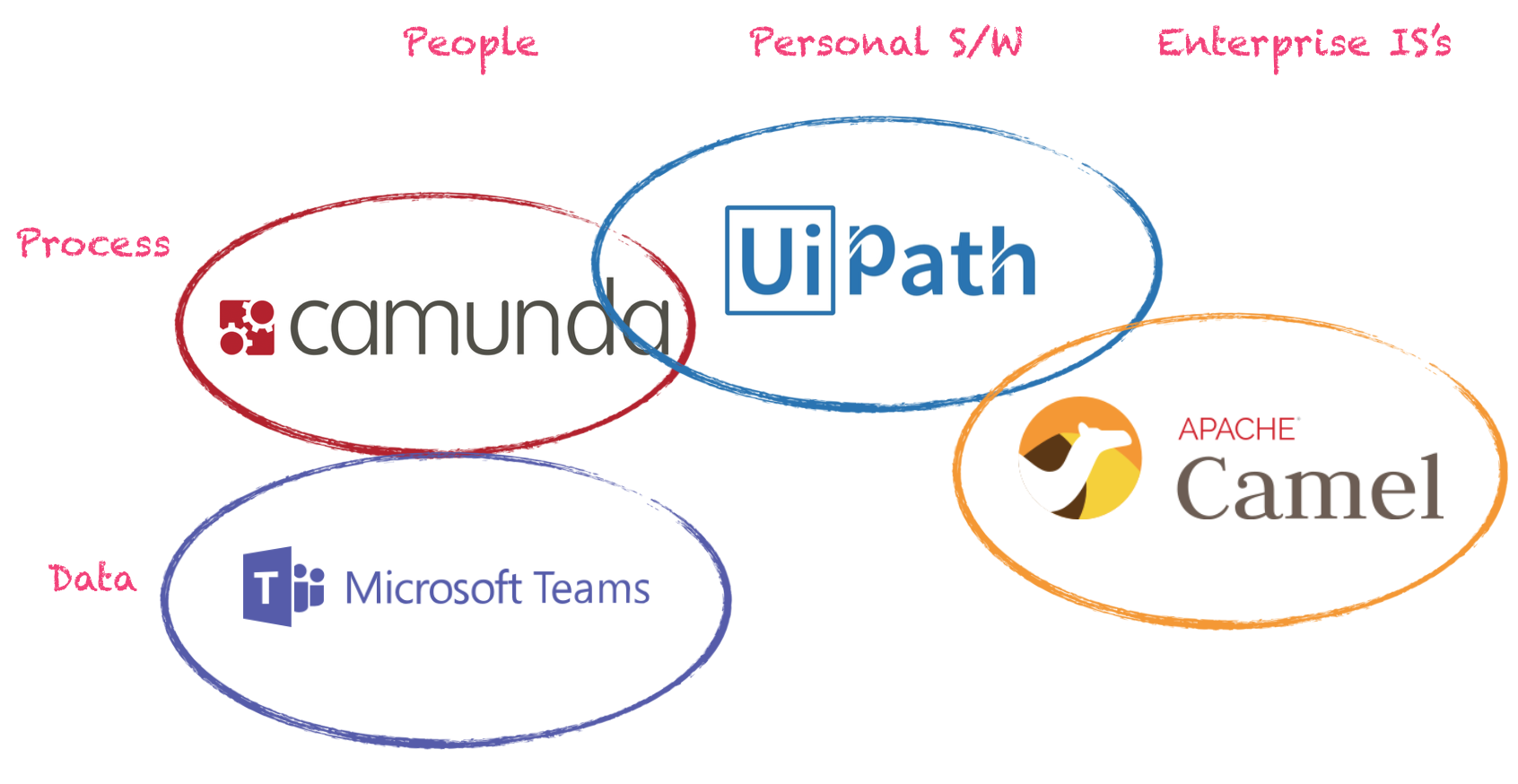 All of these are different -somewhat overlapping- approaches to RPA. As shown in the above diagram, they all have slightly different focuses.

Let’s focus on the third RPA approach for the moment: Enterprise Chat Platforms (ECP’s). My views on these have changed a lot in the last five years. Let me take you on that journey:

Stage 1: It’s The Command Line All Over Again.

Building front-end web applications is quite hard work, especially from the testing perspective. You’ve got lots of different browsers, and different browser versions, and networking to consider, and authentication.. it’s quite a lot of work. Even just keeping up with front-end Javascript libraries is a full-time job!

However, building bots takes you away from all this. Instead of worrying about where the user is clicking on the screen, who they are, whether the layout is the right colour and whether your images are using too much bandwidth, you can just focus on simple text requests and responses.

The first few bots I built were definitely in this mind-set:

So, ECP’s made life easier. But, there’s more.

Any time you want to alert a user to something, a web-page isn’t the best place to go, and you’re usually forced to fall back to sending emails. Chat fixes this, because it has persistence of messages. People can log in later and see what they missed. This means that anything you used to use email for, you can move to chat. And ECP’s generally support attachments too.

Chat isn’t really a replacement for Wikis or CMS (Content Management Systems) because they are event-based, but if you want to tell people about new versions of documents being published this is a great venue.

J2EE was great when it came out. It provided a whole bunch of services that Java developers could take advantage of to build their applications.
Chat platforms do something similar, because they provide:

Since chat history is maintained for forever, you can use it like a write-only database (and there are those, Datomic being the most interesting to me). You can index the content in the chat-system too because they generally contain features like @mentions and #hashtags, and you can look up all the messages with a given @mention or #hashtag. What else do you really need?

Since there is only (usually, preferably) a single chat system in an organisation, connecting all employees and whatever bots there are, you can set up the most amazing feed systems. As we discussed in Crystals And Code, these are pretty much an inevitable result of Information Systems (IS’s) roll-out in large organisations.

Chat platforms enable feeds because they can take data payloads, which can be consumed by bots, and processed as events in the main IS’s of an organisation.

This is a pattern we’ve seen before: the Enterprise Service Bus (ESB). These things have been around for 20 years or so (Mule and Camel being popular examples that we discussed earlier). The ESB was a way of connecting together a number of disparate applications within an organisation, via a bus on which they emitted and received events, translating them along the way into their own language.

However, ECP’s democratise the ESB significantly by allowing people to co-mingle with the communicating IS’s. They allow a level of oversight not previously possible with the ESB, and they also bring all the other features we talked about before. The ChatOps dream is that IS’s are able to communicate not just to each other via the ECP, but also to the developers and support teams at the same time.

“ChatOps, a term widely credited to GitHub, is all about conversation-driven development.While in a chat room, team members type commands that the chatbot is configured to execute through custom scripts and plugins. These can range from code deployments, to security event responses, to team member notifications. “ - What Is ChatOps?, PagerDuty

ESB’s established a common Event-Driven Paradigm for IS’s. ECP’s provide a common platform for running an ESB which communicates with IS’s and staff. You can view ECP’s as Message-Buses-On-Steroids. 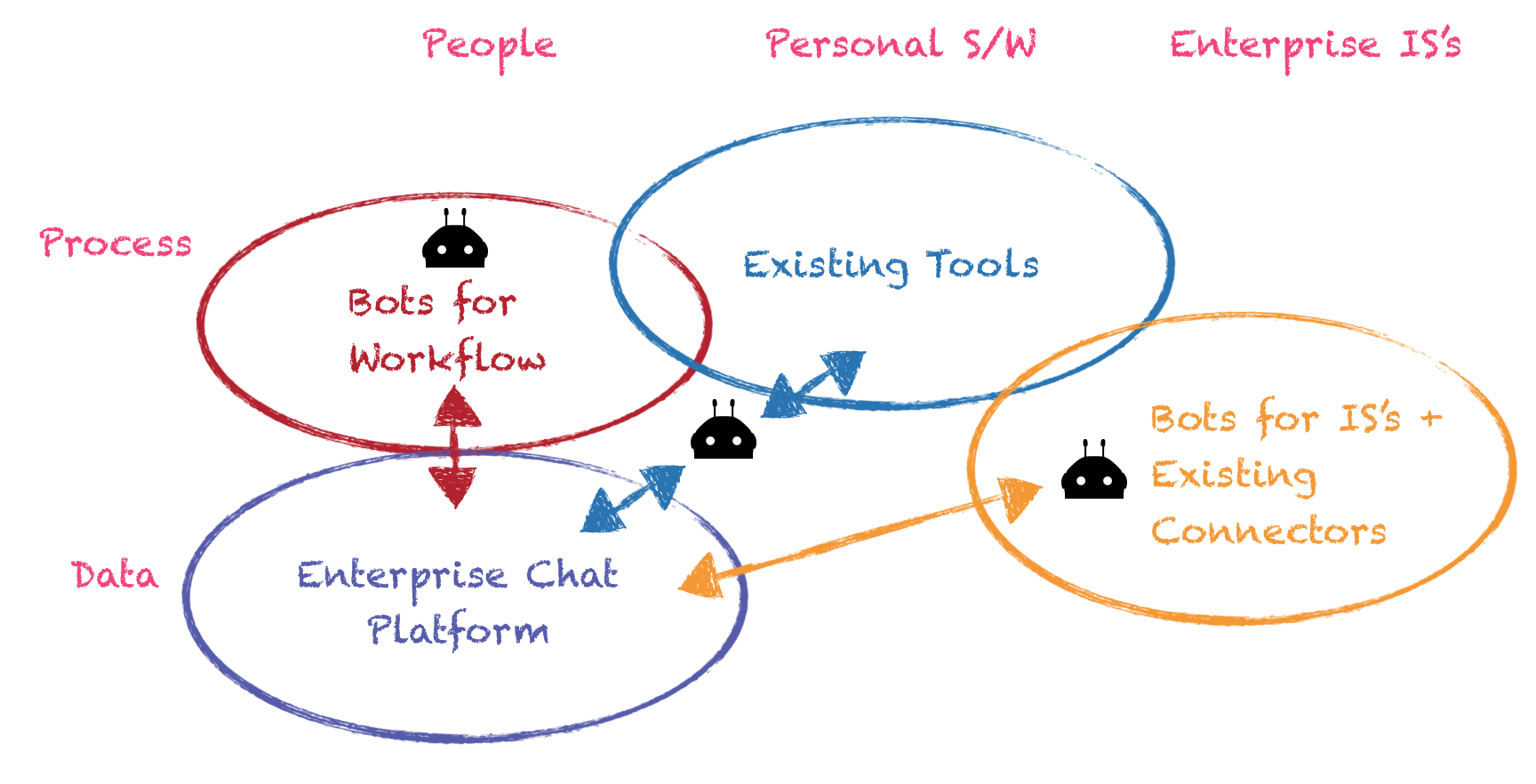 Connecting all the applications to the ECP is done by way of bots. We still have the big problem that bots are not easy to build, for exactly the same reason that ESB’s are not easy to build: translating events from one IS to another is a hard task. The Tower Of Babel problem doesn’t go away - there’s work to be done to translate between all of these systems - but a lot of the grunt-work (described in the stages section, above) is already done on an ECP.

Nevertheless, there is a clear path here to getting all of our existing legacy ESB applications working together with other types of automation on a common, democratised platform.

And, we haven’t even touched on conversational bots yet, the deployment of natural language processing (NLP) within the organisation and using AI to improve process (so-called “Hyperautomation”. That’s another day.

In the meantime, let’s focus on the translation issue.