As a project manager, I might consider that being late is a bigger risk than being early. Hence the idea of padding estimates.

But being early (a too-late estimate) risks: 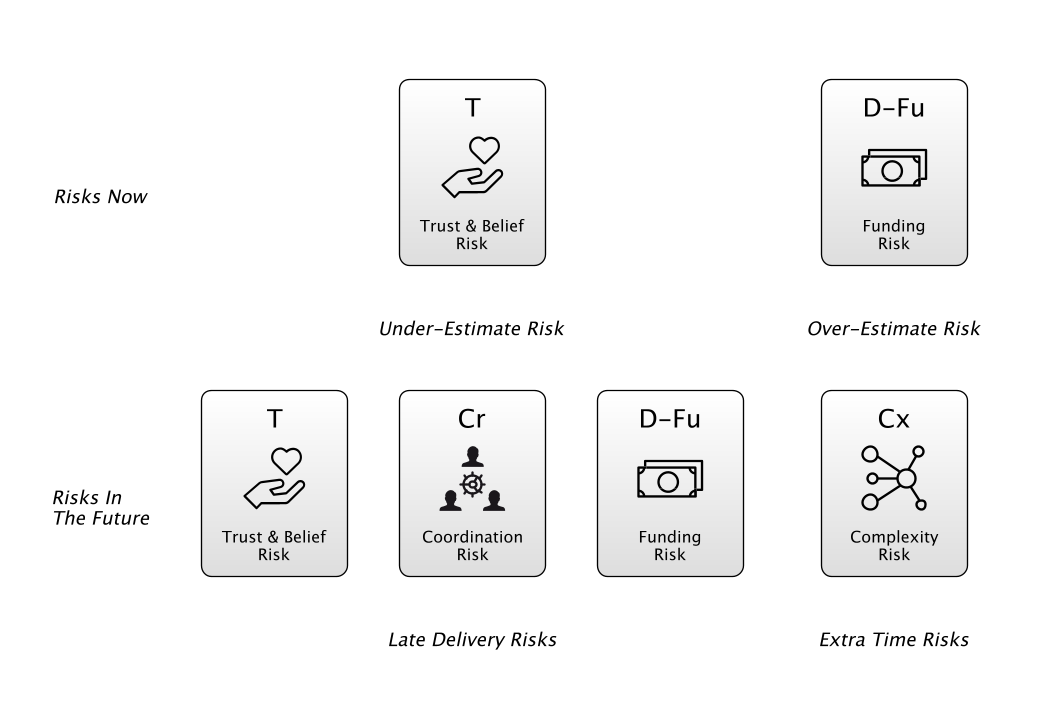 As a project manager, you’re much more likely to put your own interests ahead of the company. But luckily, the goals of the company and the project manager co-incide for the most part: managers are incentivised by pay (and maybe bonuses) to bring projects in on time, and doing so looks good on the CV.

Nevertheless, you would expect them to estimate things in a way that benefits their own risk profile, over the company’s.

A Better Understanding Of Risk

Risk “feeds back” into the estimation process in some unusual ways. Let’s change the model slightly.

Suddenly, the choice is no longer a sliding scale: we don’t have control of the estimate anymore. Either we accept the risk of the work, or we don’t. Which should we do? What does it depend on, now?

Estimates are easily perverted by the risks, as you can see above. Although we’ve discussed it before, Let’s look at Aranda and Easterbrook, 2005 again.

In their research they asked developers split into three groups (A, B and Control) to give individual estimates on how long a piece of software would take to build. They were each given the same specification. However:

How long would members of each group estimate the work to take? The results were startling. On average,

The anchor mattered more than experience, how formal the estimation method, or anything else.

What is the reason for this? Somehow, the expectation perverts the estimate. Why would developers be influenced by this expectation so much? Here are some possible reasons:

Even in a Fill-The-Bucket domain, estimates can be easily corrupted by outside influences. Effectively, the estimate itself is a risk-management tool.

In Estimates we said that the main (good) reason for estimating is:

“To allow for the creation of events. As we saw in Deadline Risk, if we can put a date on something, we can mitigate lots of Coordination Risk. Having a release date for a product allows whole teams of people to coordinate their activities in ways that hugely reduce the need for Communication. “Attack at dawn” allows disparate army units to avoid the Coordination Risk inherent in “attack on my signal”. This is a good reason for estimating because by using events you are mitigating Coordination Risk. This is often called a hard deadline.” – Estimates, Risk First

But here, we’ve seen that the long-term benefits of good estimates are sacrificed for the short-term gain of a contract won or a client impressed.

Estimating as a technique then is already suspect, even within Fill-The-Bucket domain. However, as all developers are painfully aware, building software is not like Fill-The-Bucket.