Having looked at four different problems in estimating, it’s time to take a brief but important aside: have you noticed just how prevalent the idea of heirarchy is in software? By hierarchy, I mean a general pattern of connectedness, where a parent has some children, who, in turn, may each have some further children, and so on.

In this section, I’m going to look at a whole bunch of examples, and then try to examine exactly why this is such a popular pattern. This will be a useful tool in our arsenal for estimation in the next section.

Here’s an example from the ChartJS website I was looking at, just the other day:

What is the take-away from this?

We heavily use syntax to indicate different types of hierarchies within software.

Just look at all the different ways it happens above: brackets, single-quotes, curly brackets, angle-brackets and tags, square brackets, double-quotes, commas and semi-colons.

Here is another piece of Javascript, a function to calculate a Fibonacci Sequence:

When the Javascript parser goes to work, it builds an internal Abstract Syntax Tree from the code, looking something like this: 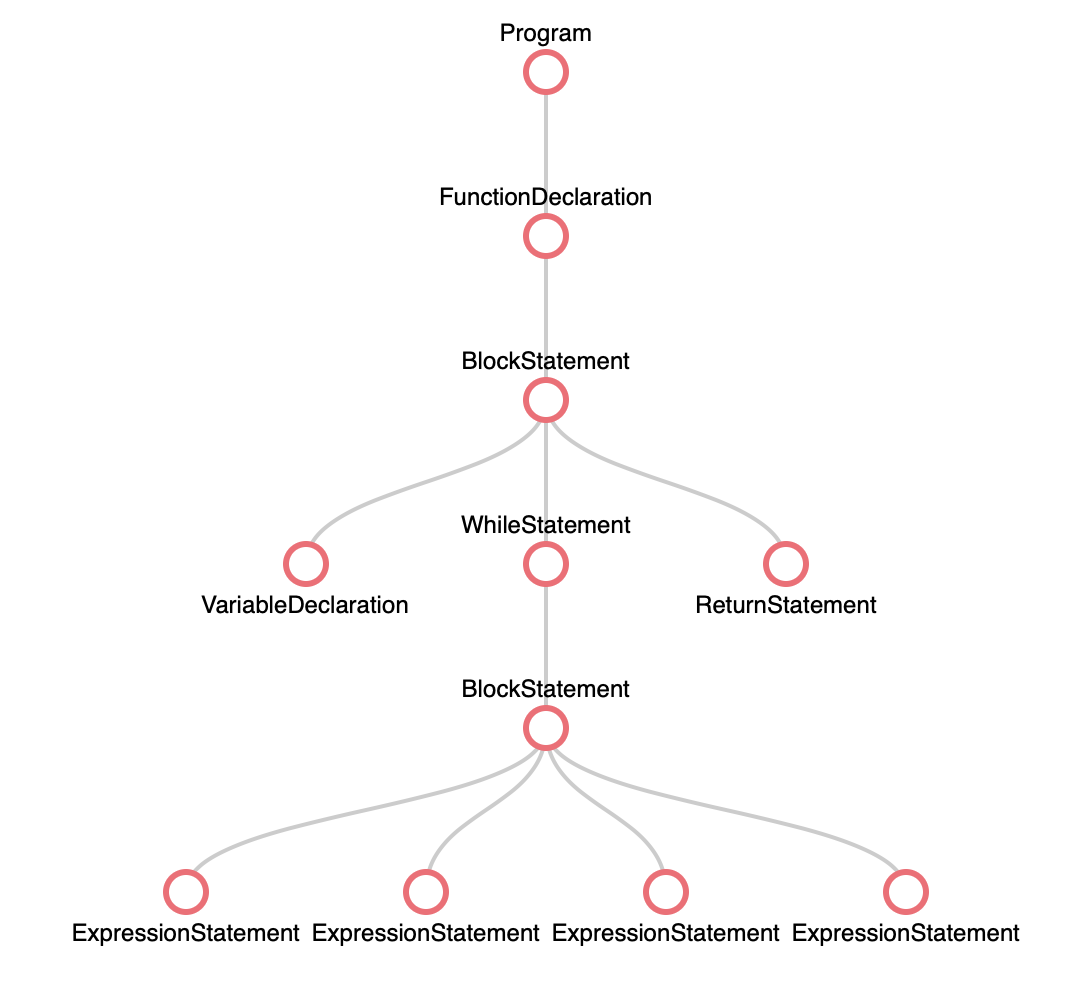 Where would we be without hierarchy in our software code? It’s not impossible to imagine:

We build hierarchies not just into our programming languages, but all over our societies. They seem fundamental to how we understand things. As well as Family Trees and Organisation Charts, we use hierarchies everywhere. For example, biologists often break down the complexity of the human body like this:

Containment hierarchies break down when you look too closely.

You see those veins in the Circulatory System? They connect with all of the bodily systems, as do nerves which are part of the Nervous System.

Where does one system end and another begin?

Although biological pressure seems to have led to a hierarchical organisation, it knows when to break it’s own rule.

You see that Javascript syntax tree? Unfortunately, we are passing things from one part of the hierarchy to another in the form of the variables (temp, num, a and b here) or named functions.

That’s because on their own, hierarchies are too simple to express complexity.

(For a graph-centric look at how we can measure complexity, please review Complexity Risk.)

The other type of hierarchy we come across both in software and everywhere else in the human experience is the classification hierarchy. As an example of this, let’s consider planets. The definition of a planet is quite bogus, and has changed over time:

“I and many other planetary scientists — like the almost 400 that signed a petition against the IAU in 2006 — have a problem with the IAU definition because the implications of it are just nonsensical. Here’s why. The IAU’s “zone-clearing” criteria, when worked out mathematically, means that to qualify as a planet at larger and larger distances from the sun, a body has to have more and more mass than it would in a closer orbit. This is in part because the zones get larger (like distance cubed, or volume) as you go outward; it’s also in part because orbital speeds are slower further out, so zone-clearing takes longer.” - Alan Stern, Fighting for Pluto’s Planet Title

A second problem with classification hierarchies is that, unlike containment, you can classify things along many axes. For example, a cup might fit into the classifications “drinking receptacle”, “kitchenware” and “Star-Wars memorabilia” all at the same time.

Nevertheless, a lot of the power of Interfaces in programming languages comes from being able to do this.

Type Systems are invariably built on the concept of classification hierarchies. And this leads to a really interesting point: whenever we “reach out” of the containment hierarchy of a software program to call another piece of code (via calling a function or a variable) we fall back to using the classification hierarchy to determine whether that connection is a valid one.

The Eclipse IDE has an AST View which you can install, which allows you to see the compositional hierarchy of this Java code as the Eclipse compiler understands it. This is an excerpt for the above program:

But there is a place where we leave the compositional hierarchy to call static functions in other packages: System.out.println. When this happens, we rely on the classification hierarchy of the Java Type System to determine whether the call is acceptable. System.out.println: takes a String as it’s argument, and it’s the job of the type checker to make sure that this call-outside-the-hierarchy will work.

In Eclipse (my Java IDE) I can therefore view both these types of hierarchy. In the above screen-grab, you can see some more compositional hierarchy methods, classes, packages, directories and projects.

Whereas in this screen grab, I can view the hierarchy of a class within Java (here the Resource class from Spring).

This has been a somewhat rambling introduction to two key types of hierarchy:

Containment hierarchies are used everywhere in software development: files in disks in servers, methods and functions in packages and namespaces etc. Good programming languages attempt to capture as much of the program’s complexity as possible within the containment hierarchy.

People understand containment hierarchies because they’re baked into (and invented by) our brains. When I look outside at a car, I can see that it is a containment hierarchy of windows, wheels and metal panels. When I think about my house, I think about different objects being contained within different rooms within a structure of bricks. But none of that exists: it’s all in my head. Everything is really just a bunch of atoms.

Classification hierarchies are also used everywhere in software development: strings, numbers, records, classes, types, schemas. A key ability for a programmer is often to be able to abstract from multiple areas and say “this is like this”.

Classification hierarchies are also baked into our brains: looking at my car, the windows and wheels, these are all classifications of objects that exist in my head. But everything is really just a bunch of atoms.

When we create programs (or set up databases) we are classifying things. Having a field for “Marital Status”, “Address” or “Planet / Not a Planet” is just something we’ve invented for the purposes of us processing data. We are copying the mental concepts we’ve developed for navigating the real world and pasting them into our code.

We should be cautious doing this, as we might well be wrong.

At this point, you’re probably wondering what any of this has to do with estimating in software development, so [let’s continue]…